Causes of lakeshore and streambank erosion

Lakeshores and streambanks are areas of dynamic energy. The powerful forces of waves, currents and ice move soil particles toward, away from, and along the shoreline.

Streams are continually downcutting into their valley, carrying sediments downstream particle by particle. The current moves from side to side, undercutting banks and causing the stream channel to meander.

The ice of frozen lakes can expand shoreward with a force of many tons per square foot, moving most obstacles in its path (including shoreline soil). Masses of ice put in motion by winds or currents can scour the banks of lakes and streams.

Even in quite small inland lakes, breaking waves and nearshore currents can dislodge sediments. Headlands (points) usually have relatively high erosion rates because the waves, currents and ice attack from all sides and eventually transport the sediments to bays, where they are deposited. Bays are usually the most erosion-resistant areas.

Erosion and the transport and deposition of sediments is a natural process along shorelines. Typically, natural erosional processes proceed very slowly, and the plants and animals that live along the shoreline can adjust to these slow changes, maintaining a stable, healthy, productive ecosystem. When some catastrophic natural or human disturbance causes this equilibrium to be upset, accelerated erosion can result. Examples of natural disturbances include large trees uprooted by a windstorm, or a flood resulting from a torrential rainstorm. Human disturbances include vegetation removal, dredging, filling, or construction on or near the shoreline.

There are several signs of serious erosion problems.

One of the best ways to control shoreline erosion is through preventive measures. There are some basic preventive guidelines.

Vegetative/No Mow: This method involves encouraging or planting trees or woody shrubs for the soil binding properties of their extensive root systems, grass and other herbaceous plants to protect against raindrop impact and scouring from surface runoff, or emergent aquatic plants to stabilize bottom sediments and dampen wave action.

Structural: This includes protective structures. The placement of rock of various sizes (referred to as riprap) has traditionally been the most common method. Other structural methods include bulkheads, gabions (rock-filled baskets) and railroad ties. However, these other methods are often visually unappealing, require more heavy equipment and technical expertise, and may be more prone to failure in comparison to simple riprap.

A new technology called soil bioengineering is now being used with success. Soil bioengineering combines mechanical, biological and ecological concepts to arrest and prevent shoreline erosion. An example is the planting of willows interspersed with rock riprap. The rock provides immediate resistance to erosion. As the willows become established, roots invade and permeate the rock and underlying soil, binding them together into an erosion-resistant mass. The willows also impart a more "natural" look to the shoreline.

Before beginning any actions to correct erosion, determine why the erosion is occurring. Without understanding the problem, any actions may be a waste of time and money and may cause or worsen the problem. Decide if the problem is severe enough to warrant correcting. Is the erosion more than in undisturbed reaches? What are the threats to private property?

Even though there have been numerous studies and publications on this topic, each problem is unique and there are no manuals with generic plans for bank protection projects which are guaranteed to work. Although it may be possible to install a simple erosion control structure by yourself, most techniques have technical standards for size, height, shape, underlayment and placement of structures. It is best to consult with a resource professional experienced with a variety of techniques when planning the installation of erosion control structures.

Thanks to Tip of the Mitt Watershed Council for the use of the above information.

Need to Start a Permit?

Need to Schedule a Pre-application Meeting?

Have a Waterway or Wetland Complaint? 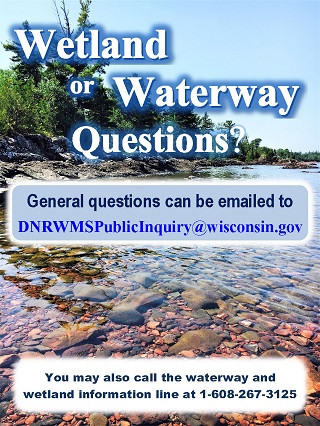 Can’t find the answer to your question? Email