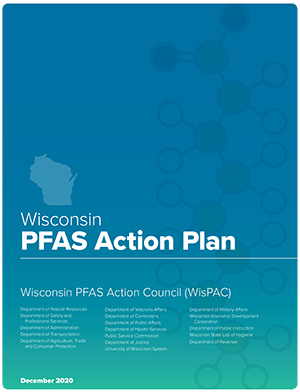 The Wisconsin PFAS Action Council (WisPAC) has developed statewide initiatives to address growing public health and environmental concerns regarding PFAS (per- and polyfluoroalkyl substances) in Wisconsin. In accordance with the stipulations issued by Gov. Evers in Executive Order #40, the council led the development of a comprehensive Wisconsin PFAS Action Plan, which serves as a roadmap for how state agencies will address these emerging chemicals.

The PFAS Action Plan was published and delivered to Gov. Evers on Dec. 16, 2020.

On Aug. 18, 2022, WisPAC delivered a progress report to Gov. Evers outlining the accomplishments made towards implementation of the Action Plan’s recommendations.

As a group, WisPAC decided on what went into the plan. Development of the first draft factored in suggestions from WisPAC members (state agencies), two advisory groups and the general public.

The graphic to the right illustrates the overall timeline WisPAC followed.

WisPAC provided a number of opportunities for public input regarding the Action Plan, including a survey, advisory groups and public meetings.

WisPAC surveyed the public from Feb. 3-21, 2020, to collect input to be considered by the state for possible inclusion in the Wisconsin PFAS Action Plan. Two advisory groups were established: one group focused on issues facing local units of government, while the other focused on citizen or public input. These groups hosted public meetings to provide a forum for engagement in the plan development process. Recommendations collected at advisory group meetings were compiled and forwarded as proposals for WisPAC to consider for inclusion in the Action Plan.

Resources from past public meetings are available on the WisPAC page. 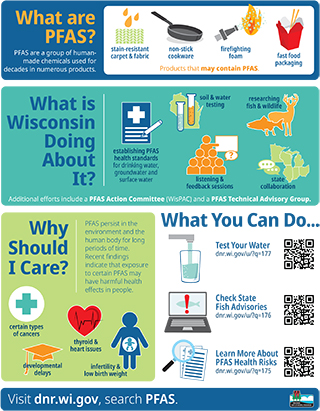