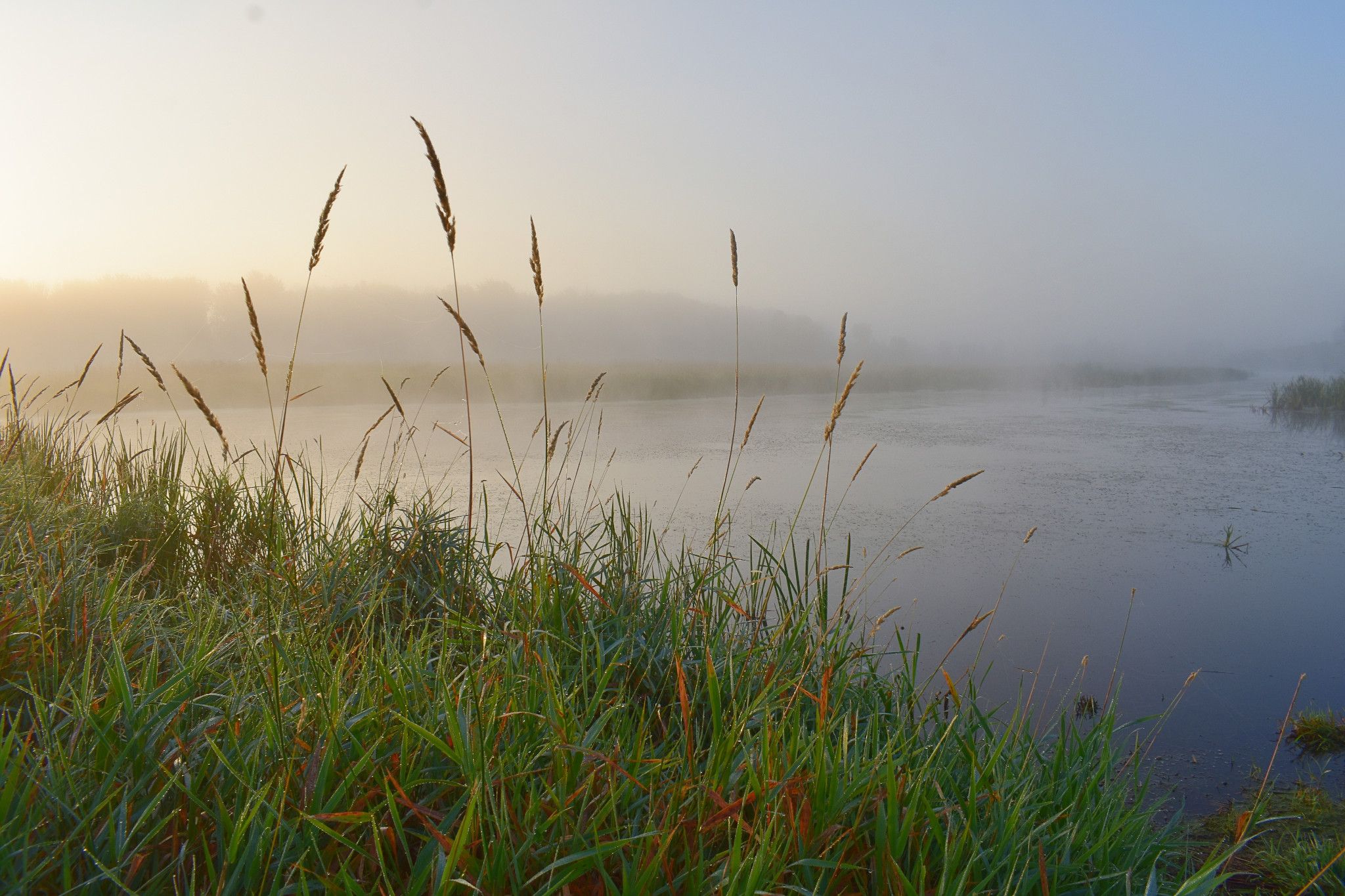 Sheboygan Marsh Wildlife Area lies in northwestern Sheboygan County just 1 mile west and north of Elkhart Lake. It covers over half of the townships of Russell and Greenbush. The area historically known as Sheboygan Marsh includes over 14,000 acres of land and surface water. It contains the largest restored wetland in the Wisconsin watersheds of lakes Michigan and Superior. The Sheboygan Marsh Wildlife Area portion of the marsh includes over 8,166 acres of public lands, of which Sheboygan County owns 7,414 acres and the state of Wisconsin owns 752 acres. The remainder of the marsh is privately owned.

The marsh lies in Wisconsin's ecological tension zone. It is also located within the interlobate moraine that was deposited by glaciers about 12,000 to 14,000 years ago during the Wisconsin Ice Age. The location of the marsh in this ecologically and geologically rich area contributes to its natural diversity. Expansive coniferous swamps of northern white cedar and tamarack, more commonly found in northern Wisconsin, occupy over 4,000 acres of the marsh. Large areas of deep and shallow marshes, shrub swamps, lowland forests, wet meadows and upland grasslands (prairies) are the dominant ecosystems of the wildlife area. The Sheboygan River flows through the marsh and its waters are held back by a dam at the northeast corner of the marsh. The open waters and adjoining wetlands of this restored flowage total over 1,700 acres in size. Sheboygan Marsh lies in a 133-square-mile watershed and receives surface and groundwater drainage from farmlands, small urban communities and part of the Northern Unit of the Kettle Moraine State Forest.

The formation of the marsh started as a large ice block, which melted and formed a kettle lake after the last glacial advance. After being a deep, open-water system for thousands of years, sedimentation eventually caused the lake to transform into a shallow-water marsh. Up to 50 feet of marl and peat is evidence that the glacial lake has been converted to a shallow-water marsh over the past 12,000 to 14,000 years.

Native American tribes that occupied the marsh as far back as 12,000 years ago include the Menominee, Chippewa and Potawatomi. The earliest European settlements in the area date back to the mid-1800s. In 1870, Sheboygan businessman John Bertschy bought approximately 6,000 acres of Sheboygan Marsh from the federal government, which acquired it from the Menominee Tribe in 1831. To drain the marsh for agricultural use, Bertschy dug ditches and removed the natural limestone dam. However, this first attempt to drain the marsh failed and Bertschy went bankrupt.

From 1912 to 1921, a second attempt to drain the marsh was fairly successful with the digging of over 20 miles of ditches from 6 to 20 feet deep and over 60 feet wide. Due to low post-war prices and the high availability of farmland, the demand for this new "wilderness farmland" vanished. By 1927, restoration efforts to build a dam to restore the marsh to its natural water level and to nurture the habitat for waterfowl and other wildlife were led by Charles E. Broughton and the Sheboygan Chapter of the Izaak Walton League.

In 1937, the County purchased 6,349 acres of the marsh at a public foreclosure auction for $17,646. The current concrete dam was constructed under the federal Works Progress Administration in 1938. That same year, construction began on a campground, roadways, picnic shelters, concession stand, boat accesses, piers and a restaurant and tavern at the east end of the marsh adjacent to the dam site. This area and facilities are known as Broughton Sheboygan Marsh Park [exit DNR], managed separately from the current wildlife area by the Sheboygan County Planning Department [exit DNR].

Today, the Department of Natural Resources staff provides wildlife, fish and forestry management of the 8,166-acre Sheboygan Marsh Wildlife Area. In addition to managing the 752 acres of state-owned lands, the DNR manages the 7,414 acres of county-owned lands by a formal management agreement executed with Sheboygan County in 1984.

Historically, the marsh area was a shallow-water marsh formed by a natural limestone dam in the Sheboygan River. The marsh water level dropped after the natural dam of limestone was removed and drainage ditches were dug. Since constructing a man-made dam to restore the historic level of the natural dam, water levels have been managed by attempting to imitate the fluctuations and draw-downs of a natural shallow-water marsh system. Today, management activities on Sheboygan Marsh are directed at habitat improvements for nesting and migratory waterfowl, small and big game animals, grassland and forest wildlife, fish and the development of facilities for compatible outdoor recreational pursuits.

Abandoned farm fields in the upland areas are managed with prescribed burning and sharecropping as 425 acres of grassland (prairie) and 70 acres of crop fields. In an attempt to foster the natural production of ring-necked pheasant, 1,620 Iowa strain pheasants were stocked in the grassland areas of the marsh from 1997 to 1999.

A 1,522-acre waterfowl refuge is established on the southern end of the property to provide resting and feeding areas for migratory waterfowl. Waterfowl hunting in this refuge is prohibited at all times and it is closed to all entry from Sept. 1 through Nov. 30.

Sheboygan Marsh is located within the "Mid- to North Kettle Moraine" Conservation Opportunity Area of Wisconsin's Wildlife Action Plan. In this plan, the marsh is noted as having continental-wide ecological significance because of its complexes of uplands, wetlands and rivers, which include northern wet forest, southern mesic forest, shrub carr and emergent marsh. As noted in the plan, some of the Species of Greatest Conservation Need that are present here include Blanding's turtle, American woodcock, blue-winged teal, bobolink, least flycatcher, northern harrier and wood thrush. Sheboygan Marsh is also a Land Legacy Place.

There are significant Native American mounds that mark summer and winter solstices on a property immediately north of the marsh. Recent archaeological investigations have classified Sheboygan Marsh as an "archaeological treasure" of national significance. It remains a candidate for nomination to the National Register of Historic Places.

Sheboygan Marsh has become a home to the Camp Y-Koda Outdoor Skills and Education Center [exit DNR], which is one of Wisconsin's pioneering and most successful outdoor education programs. The center provides a wide variety of hands-on outdoor skills training and education to more than 1,200 children from school districts throughout the area. The focus is on wetland ecology, plant and animal identification, canoeing, fishing and related outdoor skills and appreciation. Broughton Sheboygan Marsh Park [exit DNR] is the site of the tallest wooden observation tower in the state. The 80-foot structure is the result of efforts by Sheboygan County and the Friends of the Sheboygan Marsh [exit DNR], who have raised donations for the project. The Sheboygan County Conservation Association [exit DNR] has been a driving force for many years in helping to establish these and other outdoor education features, as well as helping to finance the management of the marsh.

Find out more about how to adopt this wildlife area.