Jumping worms, known also as Asian jumping worms, crazy worms, Alabama jumpers and snake worms, are invasive earthworms first found in Wisconsin in 2013. Native to eastern Asia, they present challenges to homeowners, gardeners and forest managers. Jumping worms get their name from their behavior. When handled, they violently thrash, spring into the air and can even shed their tails to escape.

This website will help you learn about jumping worms and their effects on yards, gardens and forests, what you can do to prevent their spread and what to do if they’re already on your property.

Jumping worms are native to parts of eastern Asia. They were first found in Wisconsin in 2013 in Dane County.

Jumping worms (Amynthas spp.) first arrived in North America sometime in the late 19th century, probably in imported plants and other horticultural and agricultural materials. Since then, jumping worms have become widespread across much of the northeast, southeast and midwestern U.S. In 2013, jumping worms were confirmed for the first time in the upper Midwest, at the University of Wisconsin-Madison Arboretum.

Why jumping worms are a problem

Jumping worms grow more rapidly, reproduce more quickly and consume more nutrients than other earthworms in the state. Once jumping worms become established, they quickly transform soil into dry, granular pellets with a texture like discarded coffee grounds. This altered soil structure is often unaccommodating to ornamental and garden plants, and inhospitable to many native plant species. In many cases, invasive plants thrive where jumping worms live.

Where to look for jumping worms

*The clitellum is a band of glandular tissue composed that partially or fully encircles the worm’s body.

When to look for jumping worms

Jumping worms are most noticeable in late summer/early autumn when most of them are fully mature.

It takes only 60 days between hatching and reproduction. Jumping worms, unlike European earthworms, can easily complete two generations per year in Wisconsin.

Unlike most other kinds of earthworms, jumping worms are parthenogenic - they self-fertilize and do not need mates to reproduce. Each new generation begins with the production of hardened egg capsules, known as cocoons, that overwinter in the soil to hatch the following spring. Jumping worm cocoons are resistant to cold and drought and are as tiny as mustard seeds. Since they greatly resemble small bits of dirt, they are hard to see and so are often unknowingly moved in soil, mulch, potted plants, etc.

What jumping worms do to the soil

Besides consuming nutrients that plants, animals, fungi and bacteria need to survive, the resulting soil, which resembles large coffee grounds, provides poor structure and support for many understory plants. Invasive species will move in when native plants die. 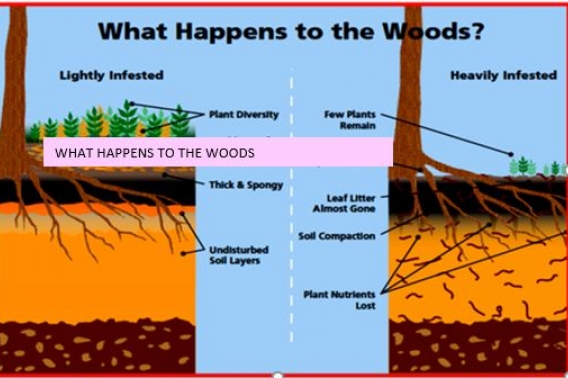 All earthworms, not just jumping worms, can harm forests by changing the soil structure and forest floor vegetation. Their feeding can result in a loss of soil moisture, compacted soil, exposed roots, erosion and an increase of pathogens and non-native plants. The result is less diversity of native plants and animals in delicate forest ecosystems.

There is no “magic bullet” to control jumping worms, at least not yet. Management mainly consists of taking precautions to not move them onto your property. If they are already there, you will need to adapt and adjust until there are better control options available.

Prevention is by far the best approach to jumping worms. Even if jumping worms are on part of your property, take care not to introduce them to uninfested areas.

The following simple steps will reduce the spread of jumping worms:

What to do if jumping worms are already on your property

Jumping worms: the creepy, damaging invasive you don’t know [exit DNR] by Matthew L. Miller, science communicator for The Nature Conservancy. October 2016. This short article serves as a great introduction to earthworms in general and the jumping worm in particular.

Invasion of the Earthworms [exit DNR]. September 2011 A two-minute National Science Foundation video that discusses the problems that non-native earthworms cause in forests.