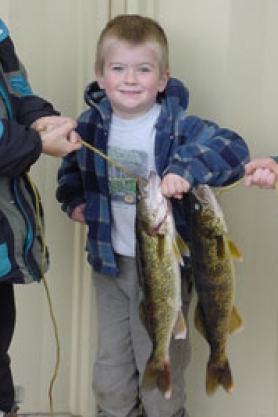 Viral Hemorrhagic Septicemia (VHS) is a deadly fish virus that was first discovered in Lake Winnebago in 2006. It's not a threat to people who handle infected fish or want to eat their catch, but it is a threat to a variety of fish species. It is very important that everyone do their part to prevent the spread of VHS and help keep Wisconsin's waters healthy.

VHS information
VHS and working in the water

Viral Hemorrhagic Septicemia (VHS) is a deadly fish virus and an invasive species that is threatening Wisconsin's fish. VHS was diagnosed for the first time ever in the Great Lakes as the cause of large fish kills in lakes Huron, St. Clair, Erie, Ontario, and the St. Lawrence River in 2005 and 2006. Thousands of muskies, walleye, lake whitefish, freshwater drum, yellow perch, gizzard shad, redhorse and round gobies died. Many Chinook salmon, white bass, emerald shiners, smallmouth bass, bluegill, black crappie, burbot, and northern pike were diseased but did not die in large numbers.

It's not a threat to people who handle infected fish or want to eat their catch, but it is a threat to the more than 25 fish species [PDF] it can kill. This is the first time a virus has affected so many different fish species from so many fish families in the Great Lakes. VHS virus is considered an invasive species (not native to the Great Lakes), but scientists are not sure how the virus arrived. It may have come in with migrating fish from the Atlantic Coast or may have hitch-hiked in ballast water from ships.

Anglers can continue to enjoy catching and eating their catch because the VHS virus has never been associated with human illness since first being discovered in European fish decades ago (Department of Health and Family Services, May 2007).

History of the virus 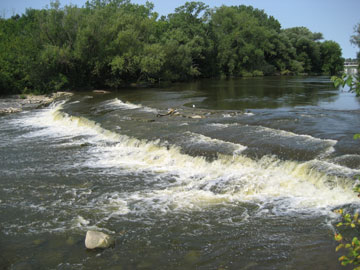 VHS was found in European freshwater trout dating to the late 1930s and continues to cause epidemics in European trout farms; it first appeared on the U.S. West Coast in 1988 in marine trout and salmon and started to be noticed in marine fish off the eastern Canadian province of New Brunswick from 2000-2004. It was first detected in Great Lakes freshwater fish in 2005. The virus found in Wisconsin is a new genetic strain that's most closely related to the virus found in the Pacific Northwest, rather than the strain found in Europe.

Test results from 2006 to 2012 show that VHS has only been detected in fish from the Lake Winnebago system, Lake Superior, Lake Michigan, and Green Bay, and hasn't spread more widely in Wisconsin, as originally feared. Those results suggest there's a very real hope that VHS can be kept out of most of Wisconsin's lakes and rivers, where it could prove a serious threat to a broad range of native fish.

What fish are most susceptible to VHS?

Recently Robert Kim and Mohamed Faisal of Michigan State University investigated the relative susceptibility of eight important sportfish species to VHS. [PDF] They injected a number of fish from each species with a wide range of doses VHSv to determine the level at which 50 percent of the fish of each species died. They found that muskellunge was most susceptible, followed by largemouth bass, yellow perch, rainbow trout, brook trout, brown trout, Chinook salmon, and coho salmon. In general, the cold water fish species faired better, meaning they could tolerate a higher dose of VHSv, than the warmer water species. Results are important to understand where management actions should focus to prevent population-level impacts of VHSv should it occur.

The following symptoms could apply to many different fish diseases, therefore, VHS must be confirmed by lab tests. Additionally, some infected fish may not show any signs and transporting these fish to new locations could spread the disease to new waters. If you catch a diseased fish or observe a fish kill, follow these instructions on what to do.

How VHS spreads and environmental factors

Infected fish shed the virus in their urine and reproductive fluids. The virus can survive in water for at least 14 days. Virus particles in the water infect gill tissue first and then move to the internal organs and the blood vessels. The blood vessels become weak, causing hemorrhages in the internal organs, muscle and skin. Fish can also be infected when they eat infected fish. Fish that survive the infection will develop antibodies to the virus. Antibodies will protect the fish against new VHS virus infections for some time. However, the concentration of antibodies in the fish will drop over time and the fish may start shedding the virus again. This may create a cycle of fish kills that occurs on a regular basis.

The virus grows best in fish when water temperatures are 37-54°F. Most infected fish will die when water temperatures are 37- 41°F, and rarely die above 59 °F. Stress is an important factor in VHS outbreaks. Stress suppresses the immune system, causing infected fish to become diseased. Stressors include spawning hormones, poor water quality, lack of food, or excessive handling of fish.

Preventing the spread of VHS

Check out our frequently asked questions about VHS. If you are unable to find the answers to your questions contact us!