Catch-and-release fishing has been an important part of recreational fishing for some time, and the practice continues to increase in popularity with many throughout the state, as anglers have come to value many fish species – like trout, bass and muskellunge – more for their sporting qualities than as table fare.

Fish responsibly. Alter your method or your gear to minimize hooking mortality. That may mean going to different hooks or setting the hook a little sooner. Apply deeply hooked fish to your bag limit and release the fish that have a good survivable hookup. In some cases, if fish are badly hooked (for instance, in the gills) or are obviously stressed, you may not be able to successfully release them. However, every attempt should be made for a positive release.

Responsible release - from a fish's perspective

Follow these simple steps for a more successful release

Following the above guidelines will help improve the fish's chance of survival after release and allow another angler to enjoy the thrill of catching a quality Wisconsin fish.

If you decide to catch and release, please consider proper release to help fish survive after you have put them back in the water. Fish can be traumatized, weakened, or injured during the handling process. By following a few simple steps, you can help fish survive.

Reduce reel-time with fish.
Encourage the use of rubber nets and cradles.
Literally wet hands before handling fish.
Easy access to unhooking tools.
Always use two hands to support fish.
Stick to the 60 sec or less exposure time.
Enable fish to recover in water before letting go.

The best management practices for responsible release fishing for bass can be summarized by:

The decision whether to keep a legal-size muskellunge is up to the angler, but remember that musky fishing has evolved into a sport where success is no longer measured by the number of fish caught and killed. Voluntary catch-and-release along with higher size limits will make the fishery even better. Exactly how much better will depend to a large extent on how well muskies survive after being released.

Experience has shown that muskellunge do survive well if they are handled carefully. Anyone who releases a musky should give top priority to the fish's well-being.

To help ensure the survival of muskellunge that you release, the following release techniques are recommended:

Anyone who has ever released a musky knows the thrill and sense of pride that comes from watching it swim away to grow larger and fight another day.

The best management practices for responsible release fishing for trout can be summarized by: 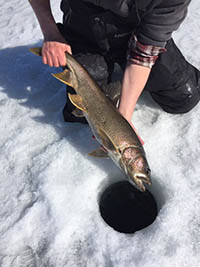 Responsible catch and release during ice fishing is important. The good news is that in the winter fish metabolism rates are much reduced and frigid water temperatures offer a little risk of thermal shock. However, cold air temperatures and wind chill factors present challenges.

In sub-zero weather, when water freezes in seconds, it is crucial to protect a fish’s eyes and gill filaments. The best way to do that is by keeping them in the water. It is best if you can release a fish in the hole without exposing it to sub-zero temperatures. If you want to get a photograph or the fish is so big you need to bring it out of the ice hole to turn it around, expose it to cold air temperatures for as little time as necessary. Handle the fish quickly and gently.