This fact sheet on when is the best time to fish in Wisconsin for what species of fish and where is the best place to find them. Also, the typical fishing method you can use should help increase your chances of catching the fish.

As the ice first forms, fishing success is good for splake and browns. Fishermen follow the forming ice along the main shore of Chequamegon Bay from Ashland to Houghton Point. The latter part of the month the splake fishery slows down. Deepwater ice bobbing for lake trout begins in the main channel of Chequamegon Bay and the Long Island Area. Perch fishing can be productive off first and second landing by Ashland as well as off Washburn and Bayfield marinas.

Bobbing for lake trout starts taking place among the Apostle Islands, especially in the Hermit, Basswood, and Madeline Island region. Depending on ice conditions, bobbing is also popular in the Bark Bay, Siskiwit Bay and Eagle Island area off Cornucopia. Whitefish and Herring fishing are also productive.

Lake trout bobbing is still popular during the first part of the month, ending as ice conditions deteriorate. Shallow water ice fishermen start to pick up trout and salmon off the mouths of tributary streams as well as in Chequamegon Bay. Smelt fishing becomes popular through the ice. Whitefish and herring also become a significant part of the shallow water ice fishery. Perch fishing and walleye action increase off Ashland and Washburn. 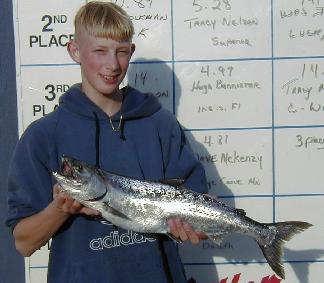 Young boy with a Chinook

Early April can be excellent for all species in Chequamegon Bay for the ice fishermen depending on ice conditions. This month also marks the start of some early season stream fishing for rainbow trout. Check regulations for a list of streams open during this time. After the ice leaves, smelt start along the shorelines. If the ice is gone, trolling for trout and salmon begins.

Excellent trolling for salmon and trout occurs from Superior to Saxon Harbor. All streams open for good rainbow trout fishing. Shore casting for Walleye and Northern pike become popular along the Ashland side of Chequamegon Bay, as well as off the coal dock in Washburn. Good Walleye action in the St. Louis River. Smallmouth bass action is good around the Kakagon Sloughs/Sandcut areas east of Ashland.

Water in the Chequamegon Bay area starts to warm up, and trout and salmon trolling slow down. Walleye, Northern Pike, Smallmouth Bass and Perch fishing is productive in this area. Lake trout trolling picks up in the Lake proper from Superior to Saxon and the Apostle Islands. Walleye action is still productive in the St. Louis River. 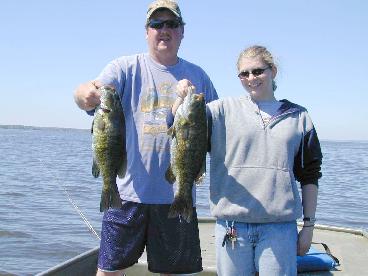 Randy and Julie with their smallmouth bass.

Water temperatures are at their highest. Trout and Salmon are deep and downriggers are the choice of equipment. Walleye trolling can be productive along the South Shore (Superior/Port Wing) and Chequamegon Bay.

Walleye and Smallmouth Bass action is still productive in Chequamegon Bay. As the water temperatures start to cool down, trolling for trout and salmon off river mouths heats up. Brown Trout, Chinook and Coho Salmon, and some Rainbow Trout begin entering the rivers at this time. Lake trout season closes at the end of the month. 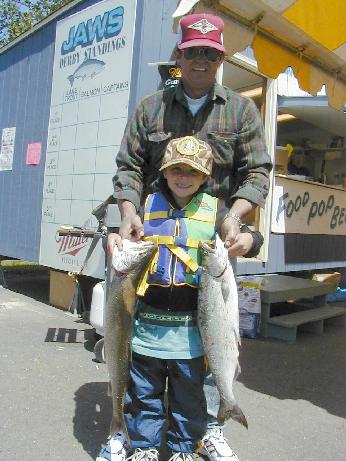 Man and small girl with a Lake Trout and Chinook Salmon.

Excellent fishing for trout and salmon in the rivers, as well as trolling in Chequamegon Bay and off river mouths.

Still a good trolling month for trout and salmon. Fishermen in boats start jigging and using slip bobbers with shiners for splake.

Open water jigging for splake continues. Ice starts to form in the Bay, and the ice-fishing season begins. Depending on ice conditions, this month can be the most productive for shallow water trout ice fishing.