or is it a stream source brook trout that simply grow faster when they spend time in the lake environment? 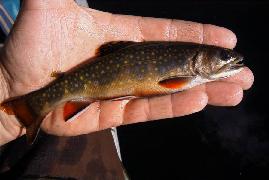 Although once thought by most to be a unique brook trout strain the latest genetic research done in the Nipigon Bay region of Canada supports the theory that these fish are simply stream source brook trout. The study results said that: coasters come from tributary brook trout populations and just grow faster and reach larger sizes in the lake than their siblings that remain in streams. When coasters mature they return to the stream to spawn with their stream-dwelling brothers and sisters. 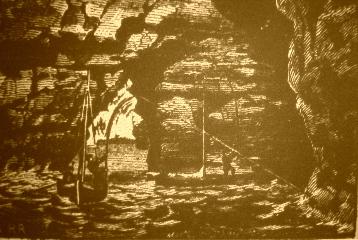 During the 1850s to 1870s large brook trout called a 'Rock Trout' (termed coaster's today) were sought along the rocky coastlines of the Bayfield Peninsula. They were named rock trout because they were angled in the fallen rocks at the base of the sandstone cliffs as depicted in this newspaper drawing from 1879.

Typical period lake catches consisted of brook trout averaging about a pound with large fish around three pounds. Occasional four-pound fish were noted. Anglers mainly fished live bait out of rowboats casting among the immediate shadows of the rocky cliffs during the months of June and July.

The coaster fishery shifted to deep holes within the lower ends of tributaries in August. Fish ascended to upstream spawning reaches during September and October. After spawning it is unknown when they returned to Lake Superior. 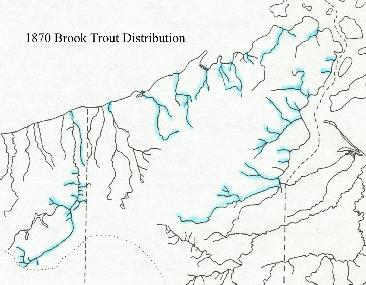 When did the coaster fishery decline and why?

The coaster brook trout fishery declined dramatically during the 1880s. We suspect that initial declines were caused mostly by commercial and angling over-harvest. But watershed changes that followed destroyed critical stream habitat which severely depressed both their abundance and chances for recovery.

Much of the damaging watershed impact included driving logs down streams, forest cut-over, forest fires, farmland drainage and road and railroad construction. These activities allowed a greater volume of water to quickly run off the landscape. Larger floods washed away and destroyed habitat that was both essential and critical to brook trout. As populations of stream brook trout declined fewer were able to reach lakeshore habitat and become coasters.

How has tributary habitat changed?

Tributary habitat has been severely damaged since the time coasters were common to the Bayfield Peninsula shoreline.

Historic stream channels contained large volumes of fallen trees like the photo to the right that once provided the "right stuff" to support large brook trout populations. 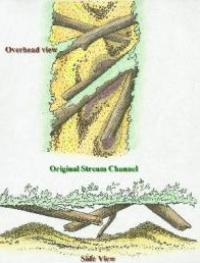 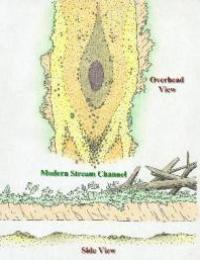 These habitat changes have resulted in fewer brook trout in our tributaries which equates to fewer coasters.

Dr. David Lonzarich (UW Eau Claire) is heading up a DNR funded project to study the differences between a well-wooded (more like the historic stream habitat) and an open section of the East Fork of the Cranberry River.

The angling public quickly requested brook trout stocking soon after the fishery began declining in the late 1880s. Millions of brook trout were stocked during the last century in Lake Superior and it's tributaries. Although stocked fish survived to be caught by anglers they failed to restore both a self-sustaining stream brook trout population and a coaster fishery. Stocking quickly switched to other more successful trout species (browns, rainbows) that were better adapted to reproducing in degraded stream habitats.

The Wisconsin Department of Natural Resources has spent the last 50 years protecting and improving the basin's brook trout populations. Examples of initiatives include: 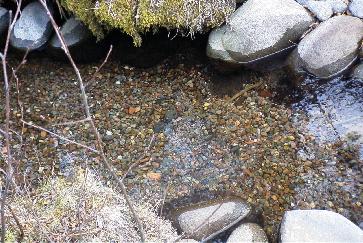