Trap nets are large underwater nets used by commercial fishers to catch whitefish and let sportfish go. They pose a potential hazard for anglers and other boaters. Downriggers, fishing lines, and propellors can get caught in the nets or anchor ropes. Watch for the flags and buoys that mark these nets and give them a wide berth.

As a safety measure, boat operators trolling Lake Michigan and Lake Superior with downriggers are required to have wire cutters on board and have direct and immediate access to them. Should their boats get tangled up, operators can cut their downriggers or cables to free their boats from trap nets or other obstructions below the water's surface.

Nets are often marked with reflective tape. If you're fishing at night, carry a powerful flashlight to help see them.

Anglers fishing Lake Michigan south of Sheboygan harbor and between Manitowoc and Two Rivers should look for the nets in shallower water this year between June 29 and Labor Day. The nets are set between 60 feet and 150 deep in these limited areas on Lake Michigan, so anglers will know with certainty where the nets won't be so they can fish freely there.

Where to look for trap nets

Trap nets are used in parts of Lake Michigan and Lake Superior in late spring through fall. Commercial fishermen move the nets to follow the fish, so it's important to always be on the lookout for the flags and buoys that mark them. The nets are found in these general locations, however. 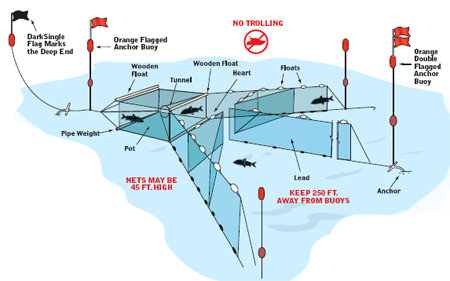 How to identify trap nets

How to avoid trap nets

What to do if you get tangled in a net