Here we go sailing past

Lessons in the sport have a rich history on Wisconsin lakes 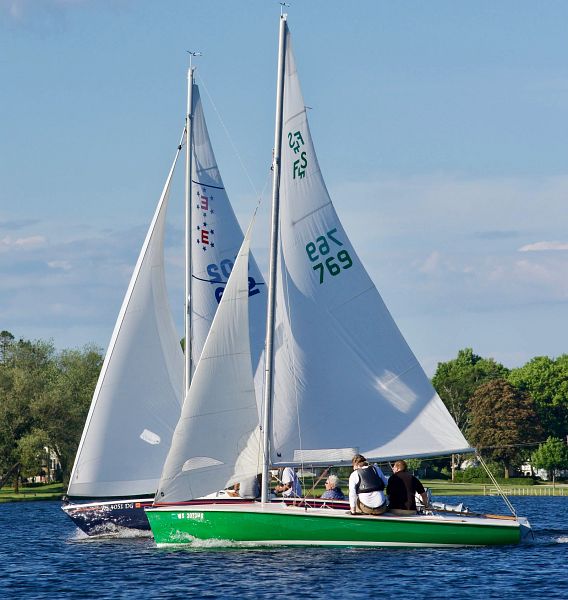 Anyone listening to pop radio 40 years ago would no doubt remember the Grammy Award-winning 1979 song “Sailing,” by Christopher Cross.

I have always savored the chorus: “Sailing takes me away to where I’ve always heard it could be. Just a dream and the wind to carry me. And soon
I will be free.”

A high school friend, Steve Carpenter, introduced me to sailing in the mid-’70s, a few years before Cross won his Grammy. Carpenter’s family kept their boat moored in the Neenah Harbor next to Riverside Park.

“I remember as a fairly young kid, maybe 10 years old or so, we would go out sailing on Lake Winnebago in the 21-foot lightning class sailboat my dad built out of mahogany in our basement and garage,” Carpenter said.

His father helped hone Carpenter’s sailing skills and he eventually became a teenage sailing instructor for younger kids in Neenah.

“We would teach students the parts of the boat, mast and sails as well as techniques for reading the wind, tacking and so forth,” he said.

Carpenter’s involvement was part of a rich history of sailing, sail training and racing on Lake Winnebago and other inland lakes in Wisconsin, not to mention the bays and broad expanses of the state’s two Great Lakes.

LONG PART OF THE COMMUNITY

Sailing might conjure visions of “champagne wishes and caviar dreams,” a lifestyle for the rich and famous. But in Wisconsin, sailing is generally no such thing.

At the Neenah-Nodaway Yacht Club, for example, the stated goals are simple:

Dating to 1864, the NNYC is one of the oldest yacht clubs in the nation. It promotes sailing for all ages, sponsors community events and supports the Fox Valley Sailing School.

Don Reid, a former commodore of the NNYC, said large lakes in Wisconsin have lent themselves well to sailing through the years.

“Inland sailing in Wisconsin started in several places all within a decade or two of each other,” he said, noting clubs in Neenah, Menasha, Oshkosh, Fond du Lac, Lake Geneva and Pewaukee — all starting in the mid- to late 1800s.

At the Fox Valley Sailing School, based out of Neenah’s Recreation Park, “We have been teaching youth and adults sailing and water safety since 1958,” group treasurer Kirsten Schrang Tarafa said.

“Our story is very much that of a small-town community sailing school that has enjoyed generational support and participation of local families on the board of directors for decades.”

And a number of other state sailing groups have similar goals, many tracing their roots back for years. 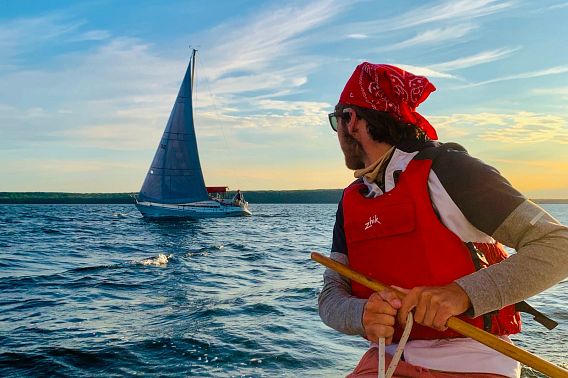 TIM SWEETSailing instructor Henry Pudlo helps to carry on a long tradition of learning to sail in Wisconsin.

Wisconsin’s sailing tradition can be found deeply rooted in the Door Peninsula — as might be expected from land nearly surrounded by water.

Associated with the Sturgeon Bay Yacht Club, the nonprofit Sail Training Foundation has kept the tradition of youth and adult sailing lessons alive and well in Door County for nearly 70 years.

The STF was started in 1952 by Harry Purinton. His son, Richard, described an unusual training method his father employed with beginning sailors.

“One of the ideas he implemented was to set up several prams on the grass on the club’s front lawn,” Purinton said. These small beginner boats were used on shore by the trainees.

“One young sailor at a time would get in the pram, and the instructors and other students would angle the boat to the wind, as if tacking, going through the maneuver of coming about, or jibing, all in a controlled manner,” Purinton explained.

His father created a small booklet containing basic sailing nomenclature, theory and his own simple illustrations, titled “Start ’Em Out on the Grass.”

“This was a beginner’s booklet used for many years,” Purinton added.

One of our grandsons has taken lessons through the Sail Training Foundation for the past four summers, and my wife, Cindi, and I began learning there two years ago. At age 64, she likes to try new things and especially loves a challenge.

The STF’s teenage instructors, certified by the U.S. Sailing Association, have all the qualities of outstanding educators — particularly patience and kindness for beginners.

Though we recently became proud owners of a 1975 Flying Scot sailing dingy, I don’t know if we’re quite ready to become racers at this point. But I find it relaxing to sit in a lawn chair along the shore on a warm summer night and watch the sailboats dancing on the water.

The words of Christopher Cross play in my head. “Sailing takes me away to where I’ve always heard it could be. …”

Tim Sweet writes about the outdoors from his home in Appleton. 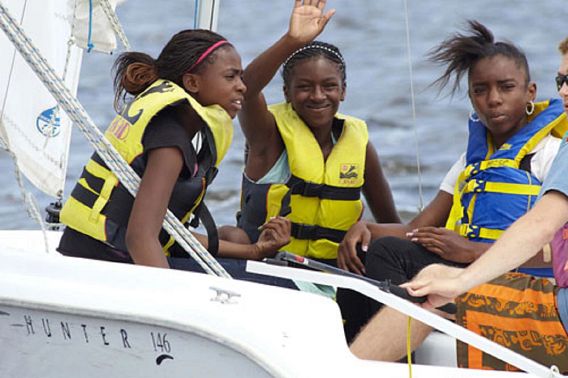 MILWAUKEE COMMUNITY SAILING CENTERBeginners can learn the ropes at a number of sailing centers and schools in the state.

While not all-inclusive, here are groups that often do community outreach to make sailing more accessible (all websites below exit DNR).