SURVEY VOLUNTEERS ARE AS VARIED AS THE SPECIES THEY OBSERVE

Think you have to be an expert to help the Wisconsin Breeding Bird Atlas II project? Think again.

With more than 1,500 participants in the comprehensive bird survey now underway, the truth is there is no single "type" of person involved. Every atlaser brings a distinct set of talents to the project, which is entering the fourth of its five years.

The atlas volunteer team is truly as varied as the bird species they observe. You can be any age, live anywhere, and need only an interest in birds to participate.

Here's a look at three unique individuals who have offered their time to participate in the Wisconsin Breeding Bird Atlas II. 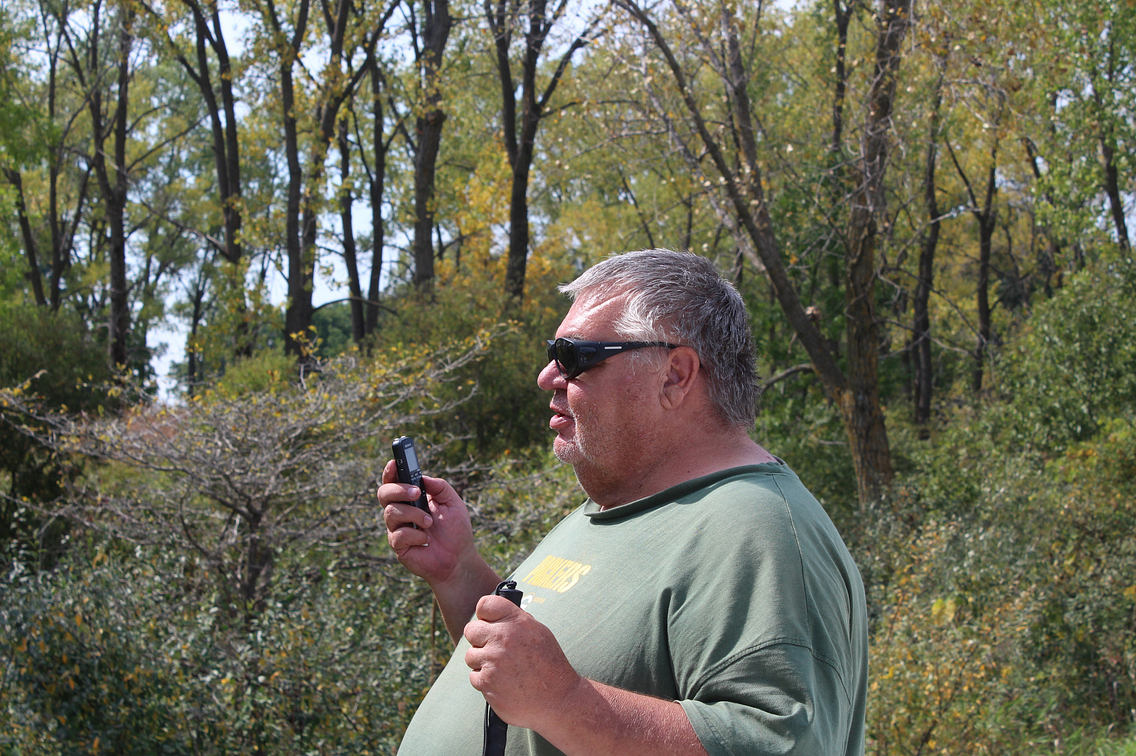 "If I can do it, anybody can," says Larry Michael who is blind.©KAREN BURKMAN

When Larry Michael of Dodge County lost his eyesight eight years ago, he thought his days as an avid birder and participant in birding projects like the Atlas, the Christmas Bird Count and myriad others were over.

"I hate to admit this, but at first I was not motivated to atlas and did not do so for the first two years," Michael says. "I felt that a blind birder had little to offer to a project like this."

After persistent efforts of Atlas coordinators, who insisted that a blind atlaser could provide plenty of important data, Michael finally changed his mind. He's glad he did. Today, Michael says birding by ear offers a perspective he could never have enjoyed before. And birding for quality, not quantity, has changed his entire approach.

"When I now hear a bird, I try to understand what is going on – from what that bird is trying to 'say,' to what the other sounds in the area might be," he says. "Birding and atlasing have become more than just hearing a bird species, checking it off the list, and then moving on to the next one. I now stop to really listen."

Michael hears birds sing the very first morning back from their wintering grounds, male birds fighting over territory, "romance" songs, alarm calls and just-fledged young demanding to be fed. Sometimes the sounds are sweet and sometimes, he says, they can be downright scary.

He typically conducts his nocturnal stationary atlasing alone, and one evening while sitting by himself and listening to the night sounds, he was startled by loud barking, chuckling, rattling, hissing, bill snapping and spine-chilling screeching just 10 feet away. He knew he was listening to an eastern screech-owl.

"I must have set up too close to its nesting cavity. I do not know who was more surprised or frightened," Michael says.

Experiences like that are something he thought long gone after he lost his sight, and he hopes he can encourage other people who are reluctant to participate in the Atlas survey to get involved.

"If I can do it, anyone can," Michael says. "This is coming from a birder who is blind. Even if you have less than desired sight or hearing, there is a place for you in the Atlas. They will welcome you with open arms." 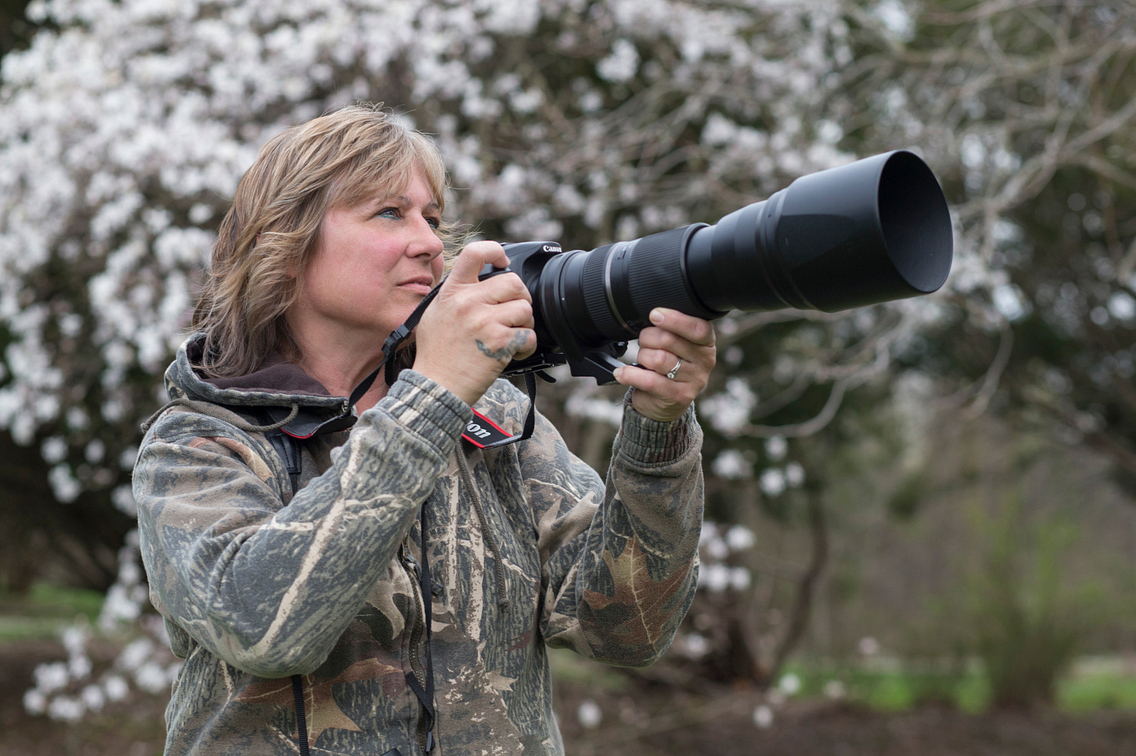 "Atlasing has gotten me hooked and out of the house," says Lorri Howski. ©BONNIE DELAP

As a wildlife photographer, Lorri Howski of Milwaukee County often found herself taking shots of birds, but it never occurred to her that what she was doing also could be useful in a conservation capacity. Once she came across some information about the Atlas, however, something clicked.

"I read some wonderful information regarding the Wisconsin Breeding Bird Atlas and bird populations, and how important it is to have documentation on what kind of birds breed here in Wisconsin. That's when I decided to help contribute," she says.

Though Howski says she was hesitant at first, thinking perhaps she didn't know enough about birds to participate, she soon found plenty of birders in the community ready to help out. Now she can't stop.

"Atlasing has gotten me hooked and out of the house," she says.

Howski travels the state exploring new birding hotspots, getting outside and learning about the different species that visit Wisconsin. She's particularly fascinated with owls: In spring of 2017, Howski concurrently observed five different active owl nests, carefully recording and photographing the birds' behaviors and interactions with one another.

"Atlasing has really driven me to focus on the behavior of the birds," Howski says. "It has me examining birds in detail instead of just looking at them. It has taught me to be more aware and to take time to stop, listen and watch."

Though Howski wasn't expecting to enter the world of citizen science, she's hooked now and eager to explore more opportunities when she can.

"It's nice to know that the information I provide will help preserve the birds and keep them in their natural environment for years to come." 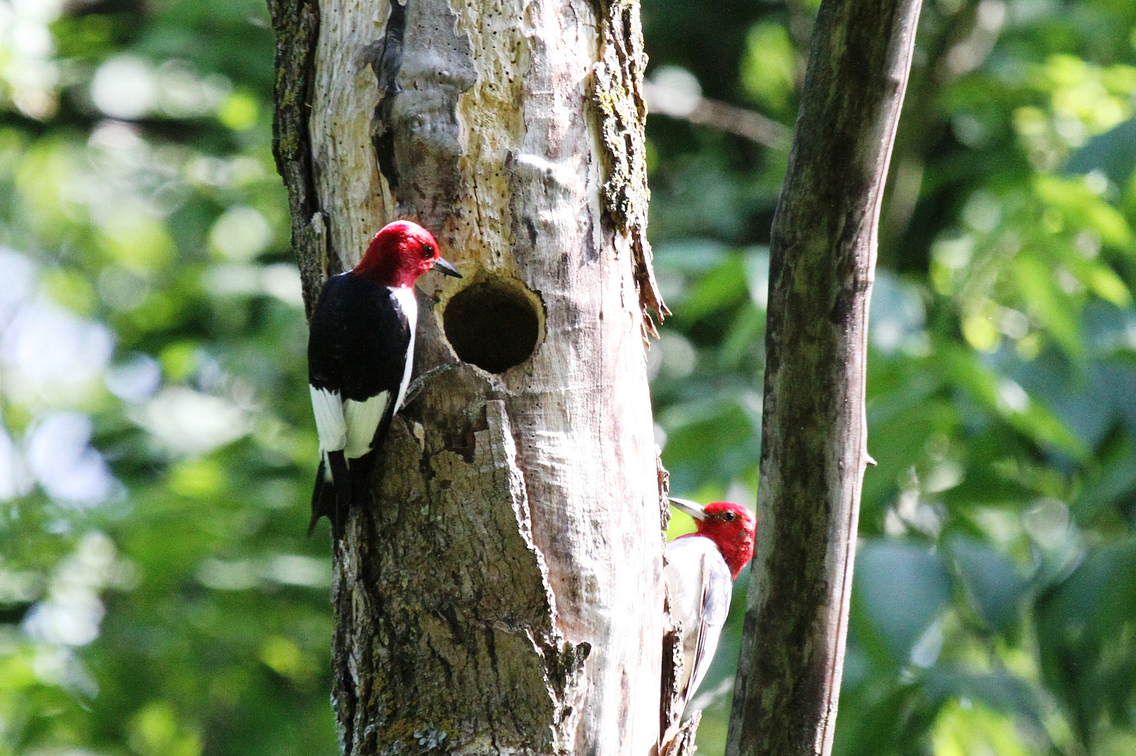 Atlas volunteers submit their observations through a website called eBird, and many old-school birders initially find using an online system to be a challenge when they begin atlasing. But what about those people who just don't use technology, period?

Ezra Bontrager, 22, of Vernon County is Amish, but with a little help from his county coordinator, Paul Hayes, he's a regular Atlas contributor. In fact, Bontrager is one of several individuals in Vernon County's Amish community who atlas.

After responding to a notice about the project he found at a local library, Bontrager eventually was connected with Hayes, who stopped by Bontrager's family farm to get him started. Now Hayes enters Bontrager's observations from written field notes.

"There is a significant Amish community in many rural areas of Wisconsin,"

Hayes says. "The Amish grow up with a close relationship to the natural world and many of them have become expert birders."

Hayes appreciates their help: Two of the priority blocks in Vernon County have Amish families acting as principal surveyors.

Bontrager says he has been birding as long as he can remember, taking family walks with his father when he was a little boy. Still, atlasing is making this life-long birder's personal bond with nature even stronger.

"The biggest change is that I now carry a notebook," he says. "Even when working in the fields, I am much more aware of the birds and their behaviors."

Bontrager has made good use of his notebook, and is now one of the top atlasers in Vernon County. One birding coup recorded by Hayes on behalf of Bontrager was the sighting of a painted bunting that landed at the farm's birdfeeder – not a breeding bird, but an extremely rare visitor to Wisconsin that Bontrager recognized immediately from having admired it in field guides.

Despite such feats, Bontrager is modest about his contributions and concentrates instead on how he can share his knowledge with the community. As the teacher at his community school, he regularly shares information from the print edition Atlas I with his students, as well as with friends and family.

"If you love the birds, try atlasing," Bontrager says. "It is a great way to share your interest in birds and spend time in the natural world."

For details on the Wisconsin Breeding Bird Atlas II, including how to volunteer, visit the project website at wsobirds.org/atlas. Or go to WBBA II to see or print a handy one-page PDF about the project.