MUSHROOMS ARE EASY TO FIND, SAFE TO HARVEST AND MAKE A DELICIOUS STAPLE FOR THE FREEZER

A big part of the growing Hunt for Food movement focuses on wild game, such as deer, turkey and small game. Beyond these wild foods, there's an abundance of natural delicacies out there for the picking, from edible fruits and nuts, to wild mushrooms and asparagus. Magazine reader Philip Whitford, Cross Plains, sent us his advice on gathering, handling and preserving giant puffballs, along with a special recipe he has perfected over the years. Bon appetit! 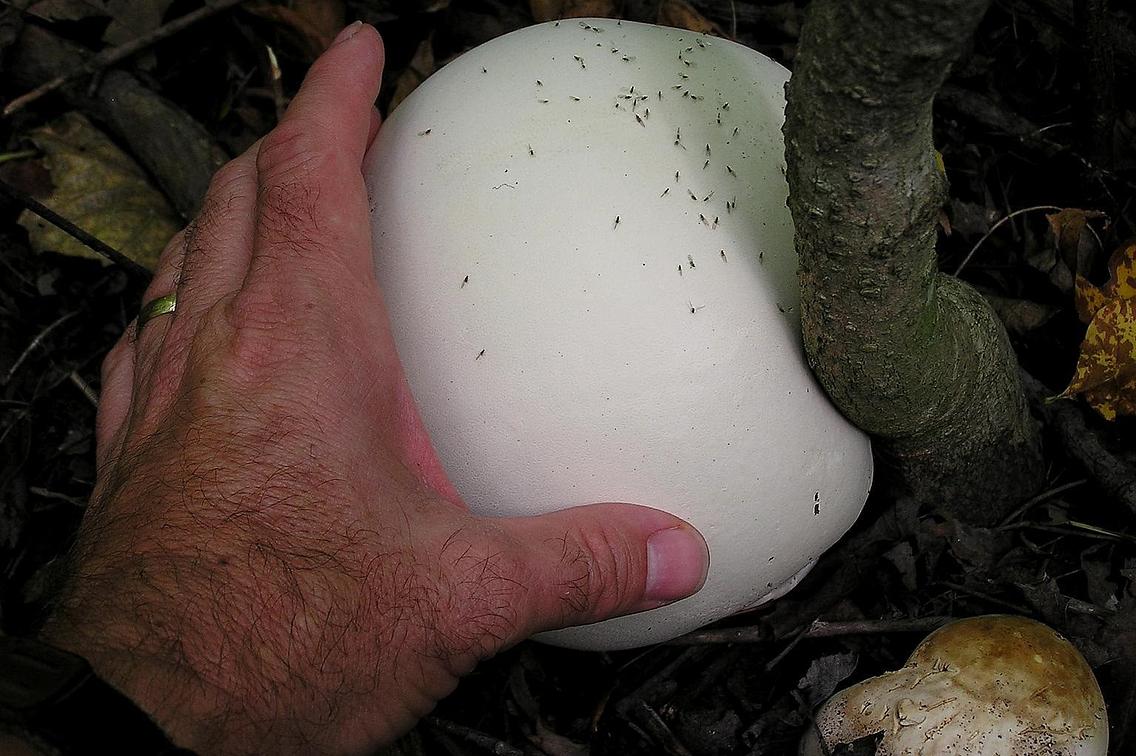 Giant puffball mushrooms can be found in late August through September and are safe to harvest and eat.© CURTIS E. YOUNG

Giant puffball mushrooms are most commonly found in late August through September in Wisconsin. They usually appear several days after a heavy rain and can be found in lawns, forest clearings and pastures. Their unmistakable appearance makes them very safe to harvest. While commonly the size of a grapefruit, giant puffballs may grow as big as a basketball or larger. They are usually spherical or occasionally loaf-shaped. They never have gills or cylindrical stems on the undersides or within the body of the puffball.

If you find a puffball (Calvatia gigantean), it is safe and best to eat if the outside is very white and firm and the inside is white and firm as well when cut. If the center is turning brown, yellow or mushy, it will be bitter and not good to eat, so should be discarded. When you do find a good puffball, it is best to process it for eating or freezing very quickly, for they can deteriorate rapidly and become inedible in a day or two.

To prepare the puffball for eating, you need a very sharp knife for slicing. Begin by cutting through the middle of the puffball to make sure it is white and firm inside. If it is, continue by cutting, peeling and discarding the rubbery quarter-inch outermost layer of the white skin. Once that is done, simply cut slices to desired thickness and brown them in a skillet in just enough butter to lightly coat each side. Repeat until you have done the whole mushroom.

If desired, try adding a dusting of garlic powder to the butter while frying. Frying slices in bacon grease is properly decadent and delicious as an alternative to butter — if you have the coronary arteries and the courage to indulge yourself to that level.

Slices can be stacked on wax paper when cooled and frozen in plastic sealable freezer bags. I have found the mushroom slices last up to two years in the deep freeze when saved this way, and they taste nearly as good in cooked dishes as when eaten fresh.

We regularly eat several slices as samples while frying those we will freeze when we find a really big puffball. A giant puffball we found in fall of 2016 weighed 14 pounds and required frying 13 batches of slices in a 12-by-28-inch stovetop griddle, and more than a pound of butter to fry them all. It's nice to know we still have several bags to use in cooking until we can hope to find more when autumn brings them "'round" again, if you'll pardon the pun. 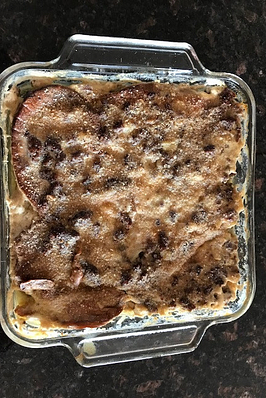 * Enough slices to form two layers each of mushrooms and eggplant in a 9-by-12-inch baking pan.

Brown the venison and onion in olive oil; set aside. In a shallow frying pan, lightly brown slices of puffball in butter on both sides; remove from pan and set aside. Dust slices of eggplant in flour and brown on both sides, with minimal olive oil per slice; set aside.

Whisk flour into milk until there are no lumps. Combine all ingredients (except bread crumbs) in saucepan and cook over medium heat until sauce begins to bubble and thicken. Remove from heat.

Assembly for baking: In a fairly deep 9-by-12-inch baking pan (or two bread loaf pans), arrange a layer of puffball slices across the bottom. Next, add a layer of the meat mixture. Then add just enough hot white sauce to cover the venison and top that with eggplant. Start over with another layer of puffball slices, meat mixture, white sauce and eggplant. Repeat until you run out of materials.

Bake at 350 degrees in a preheated oven for 40 to 50 minutes. When the white sauce begins to bubble near the center of the pan, sprinkle the bread crumbs over the top of the dish and allow to brown for about 10 minutes. Remove from oven and serve immediately. Serves 6-8 people and freezes well for leftovers.

This dish goes well with a fresh salad and crusty baguette of French bread. If you don't find a good puffball or two, substitute slices of white or portabella mushrooms.

Philip Whitford is a retired professor of biology and native Wisconsinite. He also is known as "Dr. Goose" for his 30 years of research in Canada goose behavior.

Gathering of edibles is allowed on most state properties, including state natural areas. Here's what is allowed: