In this issue of Field Notes, we explore some of the DNR's latest research on Chronic Wasting Disease in Wisconsin, recap the results of our 2019 fawn survey, follow a collared bobcat and meet three more members of our project staff.

Click the titles below to read this issue’s full articles.

Into the Weeds: Environmental Transmission and Prion Detection
Our researchers dig into the complex issue of CWD transmission through the environment.

Follow A Bobcat
Follow bobcat 1070's journey across the landscape from the time she was collared to when she was harvested.

Staff Profiles
We're pleased to introduce you to Trevor, Matt and Nathan.

Into the Weeds: Environmental Transmission and Prion Detection 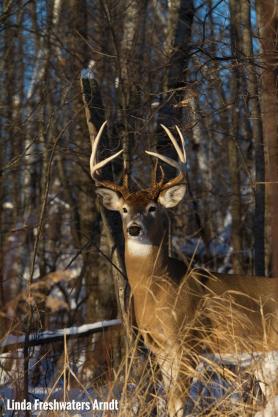 The Wisconsin DNR has taken strides toward getting a clearer picture of how severely our deer herd stands to be affected by the presence of Chronic Wasting Disease (CWD), but one aspect of the epidemic that confounds researchers is the potential role of CWD transmission through the environment. In the Office of Applied Science, researchers have undertaken several studies to better understand the convoluted mechanisms of environmental transmission. As with any rigorous epidemiological study, scientists need to start from square one: the causative agent.

All mammals have prions, which are a type of protein. The exact purpose of this protein in the context of the general brain and nervous system function is contested, but we do know that prions can ‘misfold’, and when they do, they can become a serious problem.

A prion can either misfold spontaneously or can be prompted to do so by another misfolded protein. Once misfolded, this protein is infectious and serves as a template that can go on to convert other normal proteins into the infectious, or misfolded, form.

As they misfold, prions aggregate on the cell surface and clump together to form structures called amyloids. The gradual buildup of these structures is chiefly responsible for the fatal brain degeneration characteristic of CWD. Amyloids are also present in a number of other prion diseases, including mad cow disease and scrapie in sheep. The University of Wisconsin, Madison Post-Doctoral Research Associate in Soil Science Aaron Lomax explains: “Cells basically can’t clear this misfolded [prion] because of its unique biochemical properties. It aggregates and this makes it resistant to a lot of enzymes that typically degrade and break down misfolded proteins, and it makes it resistant to a lot of detergents so that in and of itself makes it a hard molecule to naturally break down.”

Prions in the environment

CWD-infected deer shed infectious prions through blood, skin, urine, feces and saliva. This poses a significant risk to other deer with whom CWD-infected individuals come into close contact. It means that the woods and fields through which infected deer pass may also become contaminated.

Once prions are in the environment, they appear to be exceptionally resistant to degradation, although the degree to which they are resistant is unknown. Forceful application of extremely high temperatures and high concentrations of chemicals like bleach or sodium hydroxide can denature prions, though this solution is impractical and poses significant risks to the health of the environment.

Additionally, prions can bind to soil or be taken up by plants and may remain infectious for extended periods of time. Plants, soil and water are all potential environmental reservoirs of CWD. Incidents of CWD transmission between deer through the environment have been recorded in captive herds.

That said, just how effectively CWD prions are transmitted through the environment is poorly understood. Wild epidemics are difficult to study, as we have limited means for the detection or comprehensive sampling. DNR researchers have partnered with scientists from the Joel Pedersen lab in the Department of Soil Science at the UW-Madison and Dan Walsh and Jay Schneider at the USGS National Wildlife Health Center to develop more sensitive methods of detection, to better our capacity for studying environmental transmission of CWD and to identify the best and most readily accessible live tissues to test for the disease.

Prions are detected using an assay, which is simply a method for analyzing material to determine whether something of interest is present. Current assays, ELISA (enzyme-linked immunosorbent assay) and IHC (Immunohistochemistry) are effective for detecting prions in lymph and brain tissue routinely used in CWD surveillance, but they lack the sensitivity to detect prions in tissues and substrates with lower prion concentrations, like skin and soil.

“The limitations of the technology available make them hard to detect,” says Lomax. “You don’t need a lot of the prion for it to be infectious, so it’s hard to detect low quantities of it in the environment.”

“The most sensitive assays are predicated on the ability of this protein to self-replicate, meaning that it can cause normal ones to misfold. When the misfolded protein starts converting the properly folded proteins into the misfolded form, they start to aggregate and form what’s called amyloid, and there’s a fluorescent dye that actually binds to these molecules as they’re forming,” says Lomax. “As these molecules accumulate, these dyes will bind to them and they will emit fluorescence. This allows us to actually detect in real-time the formation of protein aggregates, based on the amount of fluorescent emission that we’re seeing.”

Researchers attempt to induce misfolding by placing a sample that possibly contains infectious prions, such as soil or tissue, in with a sample of normal prions. They then run the sample through a shaking cycle, essentially encouraging the properly folded proteins to misfold, as they will readily do when infectious prions are present. If there are no infectious prions present, the reaction will fail. If the proteins in the reaction do misfold, they will accumulate, the fluorescent dye will bind to this aggregate molecule and it will begin to glow.

“Soil is a very complex matrix and so there are a lot of things that might interfere with the reaction,” says Lomax. “There are two difficulties [with sampling], two main concerns when you’re trying to detect whether the prion protein is there. The prion protein might just not be present in those tissues, or our assay is not sensitive enough.”

Researchers aim to optimize RT-QuIC for detecting CWD not only in soil samples, but in feces, blood, skin, and more traditionally tested lymph and brain tissue. Doing so will facilitate more research into prions in the environment and may one day lead to simpler, cheaper, and faster CWD surveillance.

“Basically, what we’re doing is trying to develop more sensitive assays to diagnose CWD,” says Lomax. “The assay we’re trying to optimize and adapt is meant to be highly sensitive and has a quicker turnaround.”

As far as prion diseases go, CWD is unique in that it’s one of the few that can be found in tissues outside of the nervous system, brain and spinal cord. CWD is so infectious primarily because it is shed through bodily fluids and tissues. Once it is in the environment it does not readily break down and can remain a threat to deer for as yet undetermined periods of time.

The extent to which it persists in the environment is an important element of our study. Researchers will determine the potential for prion persistence in soil by conducting assays of soil samples taken from the Almond Farm. The Almond Farm is a DNR-owned facility that was once a commercial cervid farm. This farm was depopulated in 2006, at which point it was discovered that 80% of the deer residing there were infected with CWD. Soil samples were collected and archived from the farm in 2006. Assays will be conducted both on these archived samples and on newly-obtained samples from the same location, offering researchers a 14-year window of comparison to effectively determine how well prions persist in the environment.

A great many questions remain as to the environmental transmission of prions and what role this plays in CWD epidemics in wild herds. How widespread are these prions, and where are they most concentrated? How long do they last, and can they be broken down through natural processes such as exposure to microbial communities (i.e. composting), heating, wetting or drying? How many deer actually become infected through environmental transmission? Do modes of transmission change as an outbreak progresses?

Studies that investigate the environmental transmission and advanced prion detection represent important steps toward answering these questions and generating a useful understanding of Chronic Wasting Disease both in deer and in the environment. 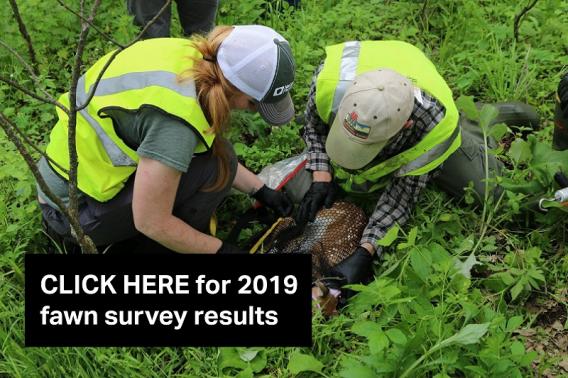 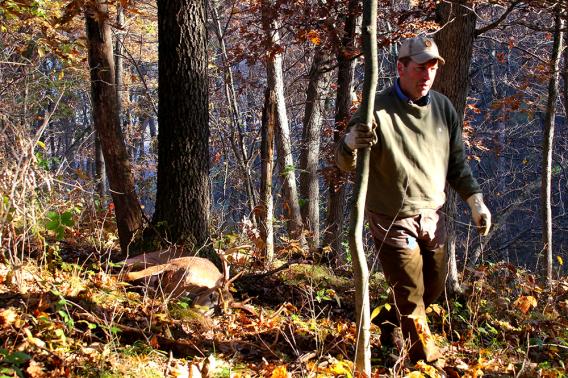 Each November, hunters hope to set their sights on a trophy buck. But what should you do if your 8-point deer is wearing a radio collar?

It’s up to you! We encourage hunters to ignore radio collars in their harvest decision-making because collared and ear-tagged deer are legal to take with your Wisconsin hunting license and tags. The presence of tracking devices does not indicate a deer’s health or CWD status, as we regularly collar deer to monitor their survival.

If you decide to harvest a collared deer, give us a call at (608) 935-1940. We’ll retrieve the collar and provide you with information about your deer. If we don’t answer, just leave us a message with the number on the collar, the date of harvest, as well as your contact information and area code.

To learn more about our collared deer research, visit dnr.wi.gov and search keyword “CWD research.” The collars have been deployed as part of the Office of Applied Science’s Southwest CWD, Deer and Predator study, to help researchers understand how chronic wasting disease impacts our herd.

Regardless of whether you take a collared deer this season, we always encourage CWD testing. It’s fast, simple and easy with kiosks and testing sites across the state. Visit dnr.wi.gov and search keywords “CWD sampling” or call (888) 936-7463 to learn more. 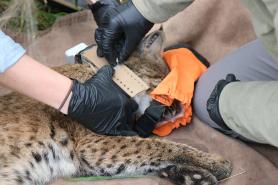 Bobcats are one of the foremost predators of deer in Wisconsin. Researchers equip these elusive felines with radio collars that track their movement, predation efforts and mortality to understand the extent to which they interact with deer across the landscape. Here, we give you a rare glimpse into the life of a radio-collared bobcat from time of capture to mortality.

Bobcat number 1070 was captured on November 6, 2017, near the intersection of County Rd Y and Evans Quarry Rd (about 7 miles northeast of Dodgeville). She was an adult female. Researchers successfully monitored this bobcat for 351 days.

In typical bobcat fashion, her annual home range was about nine times bigger than her summer home range. During the summer, bobcat 1070 spent most of her time within a 0.8 square mile range – roughly the size of 374 football fields. But throughout the year, she ventured a total of 7.2 square miles or the equivalent distance of 1,364 football fields.

Carnivore and Furbearer Research Scientist Dr. Nathan Roberts says this behavior could be caused by a couple of different circumstances. First, resources are more abundant in the summer, which makes it easier for bobcats to hunt in smaller areas. Second, female bobcats may have young that keep them close to home. For bobcat 1070, one or both of these instances may have been true.

On October 23, 2018 bobcat 1070 was legally harvested about two kilometers southwest of her capture site. In Wisconsin, it is legal to harvest bobcats with a bobcat permit and a valid Wisconsin hunting or trapping license. Just give us a call at the number on the collar so we can retrieve our equipment and provide you with information on your harvest.

In the Southern part of the state, researchers have collared around 40 bobcats. Radio-collaring bobcats like number 1070 allow biologists to study their habitat densities, revealing where deer are at a higher risk for bobcat predation. This integral data can be used to inform deer and CWD management strategies across southern Wisconsin and beyond. 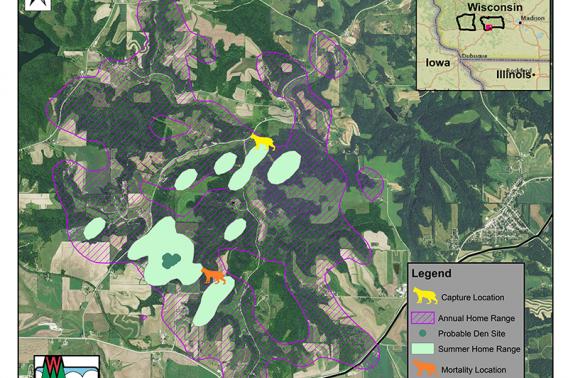 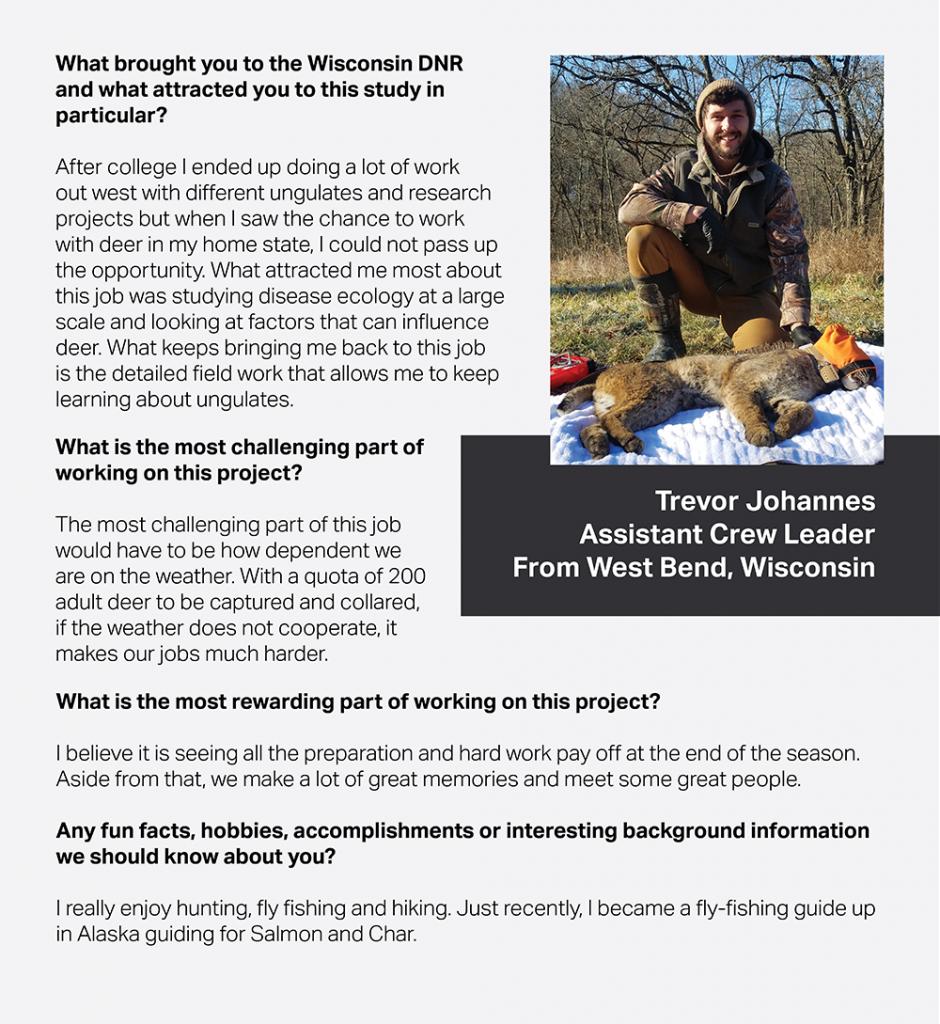 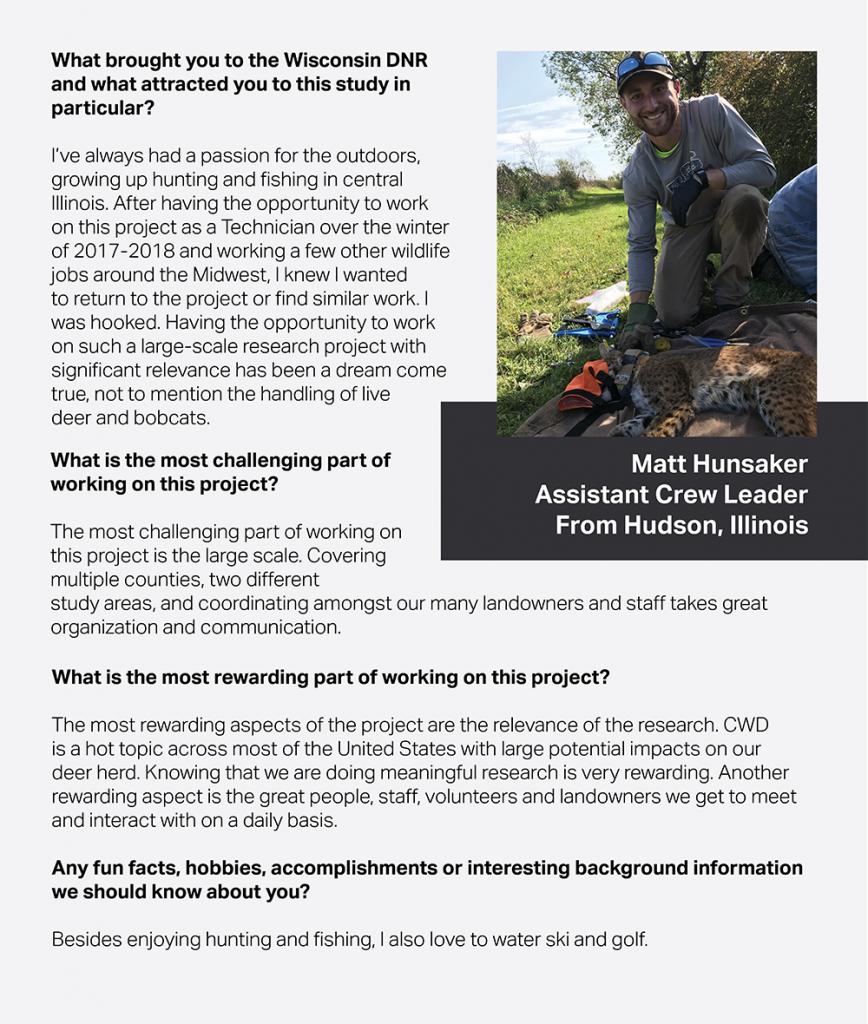 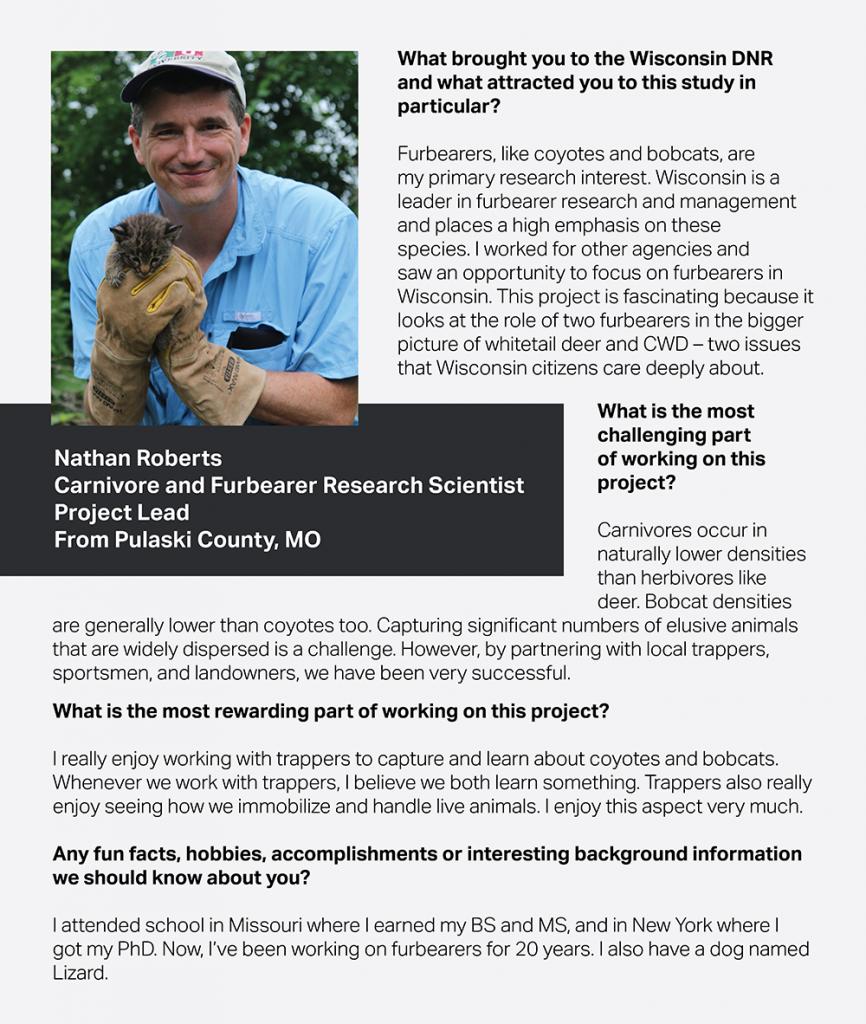