Freshwater mussels of the Mississippi River

Currently there are 39 species of mussels (commonly called clams) found along the Wisconsin portion of the Mississippi River. Their distribution varies between localized and rare populations to those that are more widely found such as the giant floater and pocketbook. Mussel populations have been affected by pollution, siltation, development and the zebra mussel invasion as well as changes in the river ecology which resulted from the building of the locks and dams.

Wisconsin DNR-Mississippi River fisheries biologists have been responsible for evaluating the effects of development and management activities on mussel populations in cooperation with other agencies in addition to monitoring the mussel harvest. As of the 2006-2007 season, all Wisconsin waters including the Mississippi River have been closed to commercial clamming.

History of mussels on the Mississippi River 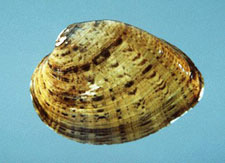 Despite their drab appearance, mussels have had a long and colorful history on the Mississippi River. In the late 1800s, pearl fever gripped this area which led to the destruction of millions of mussels. A second wave of exploitation appeared in the form of the shell button industry which thrived from 1889 to 1930. In one year clammers harvested more than 16 million pounds of shell in Wisconsin alone to be made into buttons. After the invention of plastics mussel populations once again had a chance to rebuild. Mussel populations were just beginning to recover when it was discovered that American freshwater mussels were the perfect beginning for cultured pearls. In 1995, more than one million pounds of shell was removed from the river in Wisconsin and shipped to Japan for use in the cultured pearl industry.

Some of these mussels are now endangered due to various human and human-induced ecological processes occurring in the system, including changes that have occurred from dams, including water depth, the velocity of currents and water temperature.

Freshwater mussels listed as state threatened or endangered include: