Since 2002, the DNR has delisted 89 individual streams, lakes or beaches, representing 443 stream miles and 52,000 lake acres in the state. Below are a few stories of the road to these waters' aquatic health recovery.

Eagle Creek is about an hour’s drive north of La Crosse in Buffalo County, where its waters eventually drain into the Mississippi River. Joos Valley Creek joins forces with Eagle Creek about halfway along its route, and together they flow around the bottom of Eagle Bluff, the highest point overlooking the Mississippi River 550 feet below. Then Eagle Creek, draining a watershed approximately 19,926 acres, joins the larger Waumandee Creek before they flow into the Mississippi River at Fountain City Bay. The steep bluffs of the watershed were sculpted over 10,000 years ago by runoff from rapidly melting northern glaciers. Learn more about the restoration.

The Clean Water Act required that the state prepare an analysis of the amount of sediment the creeks could allow before exceeding water quality standards. The result of that analysis was the approval of a Total Maximum Daily Load, called a TMDL, that was approved in 2003. The TMDL identified pollutant sources causing the impairment and included a goal for a 58% reduction in average annual sediment load based upon 1990 conditions. Because sediment contains phosphorus, if you can control sediment, you also end up controlling significant amounts of phosphorus – a nutrient that causes algae blooms.

Wisconsin’s Priority Watershed Program provided over $392,000 for cost-sharing on the installation of the BMPs. A special grant from the U. S. Environmental Protection Agency provided an additional $52,000 for rip rapping, streambank shaping and seeding, and barnyard runoff control systems. The amount of suspended soils was reduced through a series of successful BMPs in the Eagle and Joos Valley creeks watershed. The TMDL, sediment reduction goal, was exceeded. Both Eagle Creek and Joos Valley Creek are slated for delisting from the state's 2012 Impaired Waters List – a cause for celebration! 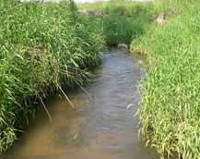 Melancthon Creek, a tributary to the Pine River, flows through Vernon and Richland counties in the Lower Wisconsin River Basin. The entire stream has been designated as Exceptional Resource Water (ERW) and is classified as a trout stream. In 1998 the upper segment from the Vernon/Richland county line upstream to the crossing with Highway 80 was designated as impaired water and placed on the 303(d) Impaired Waters list. The impaired segment exhibited habitat degradation due to sediment input and only supported warm water forage fish.

Since 1998 land-use improvements have taken place, including the implementation of contour strip cropping, which has led to decreased erosion and thus decreased sediment levels in the stream. Water quality monitoring conducted in 2006 and 2007 gathered data on the physical characteristics of the stream, water temperature, total suspended solids concentration and the macroinvertebrate and fish communities. This monitoring data showed that the impaired segment was once again supporting the designated use of Coldwater Class 1 trout waters and was meeting its attainable use and water quality standards. Therefore the impaired segment in Melancthon Creek was removed from the 303(d) Impaired Waters List in 2008. 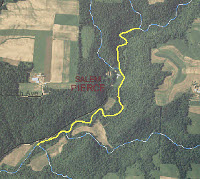 Morgan Coulee Creek, classified as a Class 2 trout stream, is a tributary to the Rush River in Pierce County. A fish survey was conducted at three locations in 2000. Low trout numbers were found at the two upstream sites which were observed to be plagued by active erosion and accumulation of fine sediments indicating that the headwaters were impaired and that segment was not meeting its potential as a coldwater stream.

In 2002, the segment from Mile 2.0 to Mile 3.2 was placed on the 303(d) Impaired Waters List for elevated water temperature and degraded habitat due to sediment pollution. In 2009 a special study was conducted which looked at fish density and temperature. The results showed an increase in the fish density and Coldwater IBI scores of good to excellent, thus indicating that the stream is supporting its attainable potential as a coldwater, Class II Trout Stream. For this reason, it is recommended that Morgan Coulee Creek be removed from the 303(d) Impaired Waters List for 2010. 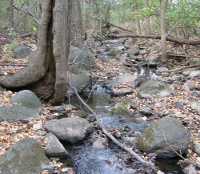 Waldo Creek is the local name of an unnamed tributary to the Onion River in Sheboygan County. The watershed for this tributary is a mixture of wetland, agricultural and urban land use. This small perennial stream flows northeast from the Cascade Swamp, along the west side of the Village of Waldo and into the Waldo impoundment. Channelization and lack of stream buffers in the upper reaches contributed to degraded habitat and in 1998, this stream was placed on the 303(d) list as a result of nonpoint source dominated sediment levels.

In 2007 water quality surveys looked at fish habitat, fish IBI scores, and dissolved oxygen levels. The results indicated the stream was in good to fair condition downstream of Depot Street and was partially supporting its attainable use of a warm water forage fishery. In 2008 it was recommended that the segment of the stream downstream from Depot Street in the Village of Waldo to the confluence with the Onion River (Waldo Impoundment) be delisted from the 303(d) Impaired Waters List. 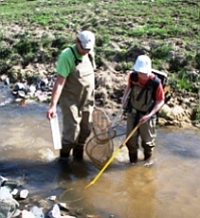 Squaw Creek, located within Fort McCoy in central Monroe County, flows for nearly six miles in a southwesterly direction before reaching the La Crosse River. It has a gradient of 25 feet per mile and drains a portion of Fort McCoy and a small amount of agricultural land outside the Fort. Squaw Creek is a Class I trout stream above Squaw Lake for 5.6 miles and Class II (2008 update) below Squaw Lake for 0.2 miles. The primary substrate of Squaw Creek is sand with small amounts of gravel and boulder present. The in-stream cover is scarce. Stormwater runoff from the many buildings and roads centered in the Fort contribute to erosion problems in the creek. Brook trout and a variety of forage fish species make up the Squaw Creek fishery. The addition of in-stream cover would benefit the Squaw Creek fishery. Access to Squaw Creek is via Fort McCoy.

In 2006 a TMDL was developed and approved by EPA for the impaired portion of the stream. The TMDL described that the dam at Squaw Lake discharges water warmed in an impoundment. In 2008 the stream was reclassified from a Class III to a Class II below Squaw Lake based on earlier survey work. Surveys demonstrated adequate habitat and water quality conditions for trout from Squaw Lake downstream to the La Crosse River. However, annual stocking of legal-sized trout is required to provide trout fishing. Generally, there is no carryover of trout from one year to the next. The stream is recommended for delisting in 2010. 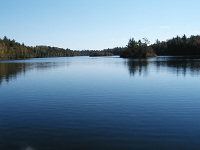 Bass Lake, located in southwest Marinette County, is a 37.4 acre hard water drainage lake. Surface runoff from approximately 451 acres of land drains to the lake. Approximately 83 percent of the watershed is cropland. Prior to 1999 there were two dairy farms located north of the lake. Bass Lake has a long history of water quality problems caused primarily by animal waste runoff from unconfined manure stacks and feedlots.

In the mid-1960s, the lake supported a diverse sport fishery, including largemouth bass, northern pike and panfish. The Wisconsin Department of Natural Resources (DNR) also stocked trout in Bass Lake for a number of years, but by 1975 hypolimnetic oxygen concentrations declined and the lake could no longer support a cold water fishery. Subsequent winter fish kills decimated the lake’s warm water fishery as well.

In 1984, the continuing deterioration of Bass Lake’s water quality stimulated discussion and action between the DNR, the Marinette County Land and Water Conservation Department (LWCD) and the local Soil Conservation Service office. A plan for control of nonpoint sources in the Bass Lake Watershed was developed in 1986 by the three agencies and the local township. Action on the plan began in 1986 when the DNR approved and partially funded a small scale priority watershed project led locally by the Marinette County LWCD. The County LWCD developed a close working relationship with the landowners in the watershed which was critical to the goal of decreasing the external loading of phosphorus to Bass Lake. The County also assisted the DNR by collecting additional water quality data which led to the conclusion that the initial traditional design BMPs were not sufficient to reduce the external phosphorus load.

The County applied for a Targeted Runoff Management grant in 1998 to continue work in the watershed to reduce external phosphorus loading further. That same year Bass Lake was placed on the Impaired Waters List for the pollutants of phosphorus and mercury. It has since been determined the mercury impairment was listed in error. Steps were implemented at one farm to eliminate direct animal waste runoff from the facility. This included completely isolating the animals in a free-stall facility, constructing a second liquid manure storage facility and dredging the nutrient-enriched spring pond which drained to the lake inlet along with diverting flow around the pond. The second major farm operation decided to enter into a farm abandonment agreement. State Stewardship Program funding was utilized for the agreement and to purchase a conservation easement on 55 acres of adjacent cropland along 2000 feet of Bass Lake’s shoreline. Two water and sediment control basins were also installed by U.S. Fish and Wildlife Service in the easement area further to reduce sediment and nutrient runoff from cropped fields and to catch potential manure spills while also providing wildlife habitat.

Finally, after determining the external phosphorus loading was decreased to a satisfactory level, money from the Lake Protection Grant Program was used to implement an alum treatment designed to blanket Bass Lake’s bottom to short circuit internal phosphorus loading. The alum treatment took place in the fall of 1999. The end of this long road to lake recovery resulted in a final cost of about $684,000 not including some of County staff time in the early 80’s and all of DNR personnel staff time and some lab costs.

Formerly carp-infested, algae-clogged water, Silver Lake near Manitowoc has been put on the road to recovery - and now delisting - through teamwork. The 69-acre lake was the subject of a $750,000 restoration effort to improve water clarity, restore the lake’s ecological balance and revive panfish and gamefish populations.

DNR led the restoration project, in partnership with the Manitowoc County Soil and Water Conservation Department, Holy Family Convent, the Manitowoc County Lakes Association, and the Silver Lake District. During the first phase, an earthen berm was constructed to separate Silver Creek from Silver Lake to reduce the phosphorus and sediment entering the lake. The lake was treated with Rotenone to eradicate carp and bullheads, which contributed to poor water quality and poor quality fishery.

The lake was treated with alum (aluminum sulfate) in 2004 to control the internal recycling of the nutrient phosphorus – a built-up legacy from years of pollution. The final phase restocked fish from 2004 to 2009. Concurrent with the work was natural revegetation of the shoreline and restoration of Silver Lake Park for public use, including a new boat ramp and expanded parking lot.

"The Silver Lake project is an excellent example of the good work that can be done when many people and agencies work together," says DNR Water Resources Biologist Mary Gansberg. "It’s too early to claim total victory, but the crowds we see using the lake and this proposed delisting of the lake show the lake is headed in the right direction."