A framework for nutrient reduction and management

Wisconsin's Nutrient Reduction Strategy is a broad overview of nutrient management activities for both point sources and nonpoint sources in Wisconsin. This strategy documents ongoing activities whether they are implemented by federal, state or local agencies. It identifies areas where further progress is needed.

The 2013 Nutrient Reduction Strategy was developed by the DNR with contractual assistance from the University of Wisconsin–Extension. It was the original document that set the DNR's nutrient reduction goals and influenced the development of the agency's strategy moving forward. 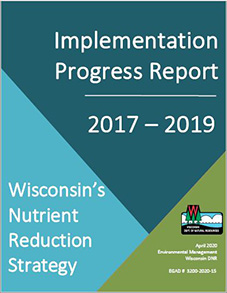 The Wisconsin Nutrient Reduction Strategy, developed with partners and finalized in 2013, envisioned that implementation progress would be measured, tracked and reported to the public. The 2017-2019 Implementation Progress Report provides a comprehensive description of the substantial and widespread efforts to reduce nutrient losses to Wisconsin rivers, lakes and streams.

Nutrient reduction is being accomplished through existing programs at the local, state and federal level that either regulate point sources or promote conservation practices by agricultural non-point sources. Most importantly, implementation is occurring at the watershed scale through partnerships between municipalities/sanitary districts, county land and water conservation departments, farmers, environmental/watershed groups, UW-Extension and state/federal agencies to improve water quality. With partners working together, outreach and education are provided, planning is accomplished and practices are implemented that lead to measurable reductions in nutrient losses.

Initial lists of high priority "top group" HUC 10 watersheds comprising about 10 percent of the state's watersheds were developed for the Mississippi River Basin and Lake Michigan Basin for phosphorus and nitrogen to surface waters and for nitrates in public drinking water wells. The initial list and subsequent updates of the list may be used in selection of future federally-funded implementation projects.

Trend analysis of data collected over more than three decades at long-term monitoring river monitoring sites shows a decrease in phosphorus concentrations for much of the southern half of the state. In contrast, nitrogen concentrations have increased somewhat.