Impaired waters are identified by comparing monitoring results for a given water to water quality parameter thresholds, which provide guidelines for identifying water quality conditions.

Impaired waters in Wisconsin are affected by a variety of pollutants. Nearly 75% of listings are for the pollutants Total Phosphorus (TP), Sediment/Total Suspended Solids (TSS) and Mercury. 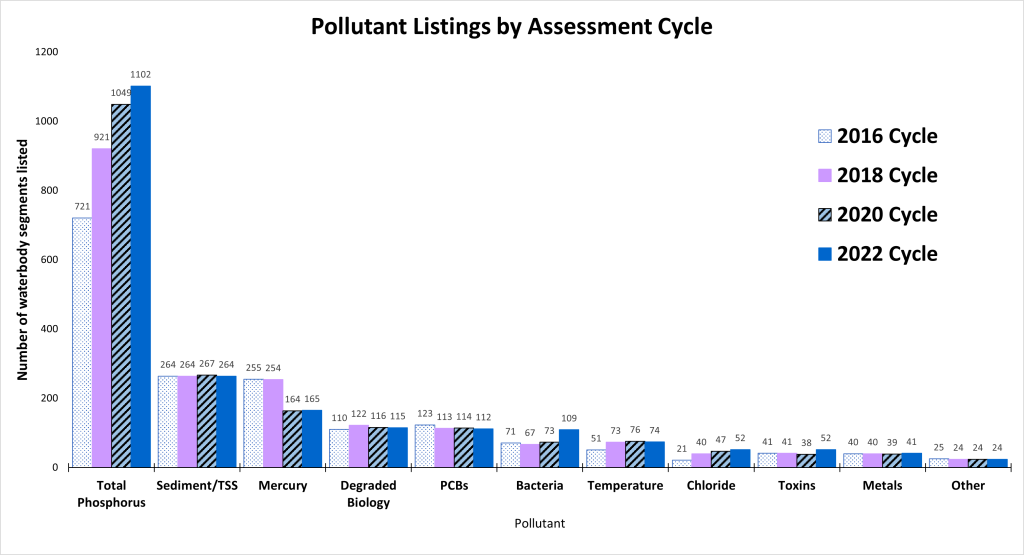 A total of 47% of listings are for total phosphorus (TP) as of the 2018 assessment cycle. The majority of pollutant listings prior to 2012 were for mercury because there were no TP criteria to use in water quality assessments. In 2010 the state adopted phosphorus criteria for lakes, rivers and streams. The 2012 assessment cycle was the first time these criteria were used for assessments and as a result the number of TP listings increased. The increased number of listings is a reflection of updated standards rather than worsening water quality.

Mercury is found in most fish throughout the nation. Fish consumption advice is issued due to mercury and other pollutants that accumulate in fish. In Wisconsin, a statewide advisory applies to all inland waters and additional exceptions apply to some waters.

Sediment runoff is the loose sand, clay, silt and other soil that settles to the bottom of a waterbody. This is the most common pollutant in rivers, streams, lakes and reservoirs. When sediment enters a waterbody, it:

In addition, sediment often carries nutrients with it into Wisconsin streams and lakes.

While natural erosion produces nearly 30% of the total sediment in the United States, erosion from human use of land accounts for the remaining 70%. In agricultural watersheds, the most significant source of sediment is tilled fields. Farm fields, especially when conventional tilling is used, lack a continuous layer of vegetation to hold the soil in place, so sediment runoff is a major concern.

Improperly managed construction sites also contribute significant amounts of sediment to local waterways; up to 25 times that of agricultural lands (Chesters, 1979) and 2,000 times that of forested lands (EPA 833-F-00-008, R 12/05). Construction activities that disturb an acre or more of land are subject to local and state construction site regulations to limit the amount of sediment that is permitted to leave a site. Another significant source of sediment comes from domestic animal activity. Without proper management, livestock can over-graze, creating pasture erosion and trampling streambanks.

Elevated chloride levels generated by road salt usage can impact drinking water, accelerate corrosion. There is no viable treatment to remove chloride released into the environment. Over time, elevated concentrations of chloride may appear in groundwater and surface waters used for drinking water, leading to potential human health risks.

Chloride is also very corrosive and accelerates damage to vehicles and equipment, external features of buildings and metal components of infrastructure. Water softener salt is the second most common contributor to chloride increases.

High chloride concentrations can harm fish and fish habitat. Chlorides found in salt draw moisture from fish bodies which alter their electrolyte balances and can lead to reproductive failure and a higher likelihood of disease. Salt can also cover habitat for fish and other aquatic life making it difficult to sustain life.