In this issue of Field Notes, we explore composting as an alternative to traditional methods of carcass disposal. We discuss the difference between specialist and generalist carnivores and share an update on our capture numbers. Lastly, the final season of our annual fawn search is approaching - be sure you don't miss the last opportunity to participate in the Southwest WI CWD, Deer and Predator Project.

Click the titles below to read this issue’s full articles and view our videos.

Into the Weeds: Composting as a means for carcass disposal
Can composting be used to degrade infectious prions and mitigate the risk for CWD transmission through deer carcasses?

Specialists vs Generalists: A carnivore's dilemma
What's the difference between a specialist and a generalist meat-eater?

Capture Season 2020: Numbers update
How many of our target species have we captured and collared so far?

Fawn Search
Stay tuned in April for more details on how to sign up.

Into the Weeds: Composting as a means for carcass disposal 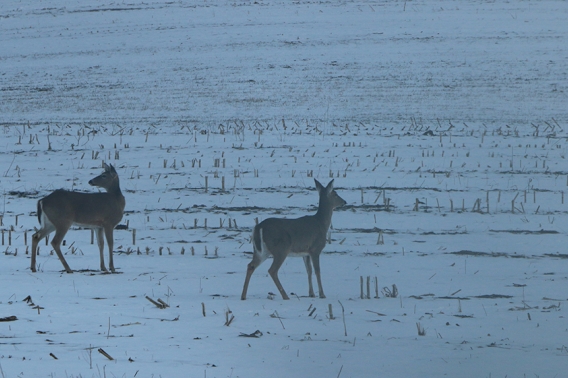 The Wisconsin DNR is exploring composting as a potential avenue for the safe disposal of deer carcasses that have tested positive for Chronic Wasting Disease. Infected carcasses may pose a risk for disease transmission to living deer, as does the environment where these carcasses decompose. As yet, the options for the disposal of deer carcasses are limited, and the DNR has a vested interest in finding a safe, effective and low-cost way to mitigate the risk of CWD transmission through environmental contamination.

“We know that there was research done in Canada where it was shown that composting was highly effective in denaturing or deactivating prions and making them no longer infectious,” says Tamara Ryan, spokesperson and acting director of the DNR’s Bureau of Wildlife Management. “What we’re striving for is to replicate that research, and the hope is that we can demonstrate a similar result.”

The Wisconsin DNR has partnered with Soil and Waste Resources Professor Rob Michitsch at the University of Wisconsin-Stevens Point, as well as the Joel Pederson lab in the Department of Soil Sciences at the University of Wisconsin-Madison. Michitsch is an expert on composting and is spearheading carcass composting research at the Almond Farm. The Almond Farm, formerly a commercial cervid farm, was depopulated in 2006 and is now owned by the DNR.

Under controlled experimental conditions, 4 compost cells have been set up on the Almond Farm, each of which contains two CWD-positive deer carcasses, with one additional cell set up with two carcasses that tested negative for CWD. The carcasses are laid in biopiles, or compost piles that are insulated with sawdust, but which are not turned like a traditional aerobic compost pile.

“The strategy is to keep all pathogens and contaminants contained within the pile, let them degrade, and then produce a wonderful compost product at the end,” says Michitsch. “It takes a lot longer in a biopile because no turning is involved, but nature still does the work for us.”

Microbial communities work to break down the deer carcasses in their entirety, much more thoroughly than would occur in the wild. Michitsch will continually monitor the process and collect leachate from each of the piles, which will be sent along to the Joel Pederson lab in Madison, where researchers will determine whether the prions from the CWD-positive carcasses were successfully broken down.

“If we can prove that composting is successful at killing off the prion, it’s a very low cost, very applied method of dealing with carcasses, whether it’s carcasses from roadkill, or from hunters, or slaughterhouses,” says Michitsch.

“The hope is that [composted] waste could potentially be disposed of in a landfill, or it could be utilized as a fill-in other ways, such as abandoned mines or roadway improvements and those types of things,” says Ryan. “Ultimately our goal is not only that the composting waste stream may be more acceptable to landfill operators, but the ultimate goal is also to develop best management practices for composting deer carcass waste.”

Specialists vs Generalists: A carnivore's dilemma 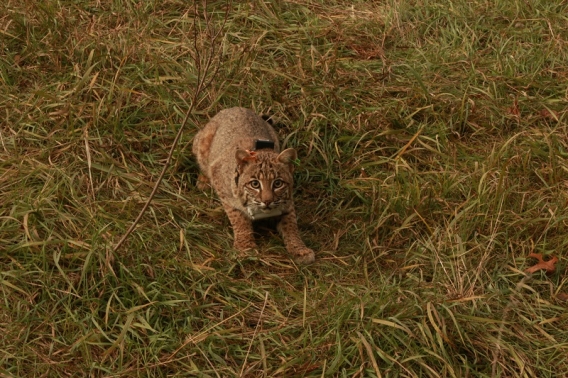 In wildlife ecology, carnivorous species are often classified either as generalists or specialists, depending on their habits. A specialist is a carnivore that relies on a specific species, or group of species, for their diet. The most well-known specialist is the Canada lynx. Canada lynx are well adapted to hunt and prey on snowshoe hares; so much so that the lynx is limited to areas that support hares. A generalist, on the other hand, can survive on a variety of prey, in a wide selection of habitats.

In southwest Wisconsin, the carnivores that deer are most likely to encounter are coyotes and bobcats, both classified as generalists. While other carnivores, such as wolves and black bears, do occasionally appear in southwest Wisconsin, deer are much more likely to encounter a coyote and bobcat than these larger species. As such, we are interested in what role these common predators play in a shared landscape with white-tailed deer.

Coyotes are a common canine species across much of North America. In Wisconsin, most coyotes weigh around 30 pounds. Coyotes eat a wide variety of foods, including insects (especially grasshoppers), small animals like mice and reptiles, rabbits and deer. Coyotes do occasionally eat fruits and vegetables as well. It is not unheard of to see coyotes eating watermelons and pumpkins. Coyotes are a good example of a generalist species because they can use all kinds of habitats and eat such a wide variety of food. Coyotes are found on the tundra of Alaska, the deserts of Mexico, farmlands, and even in the parks of our largest cities.

Although more elusive than coyotes, bobcats are common in southwest Wisconsin. Bobcats in Wisconsin average around 20-30 pounds, although some do weigh in slightly above 40 pounds. Bobcats eat similar foods to coyotes, such as small animals, rabbits and deer. Unlike coyotes, they don’t eat vegetation or fruits. Bobcats can also use a wide range of habitats. In Wisconsin, we see them in agricultural areas, forests, wetlands and even suburbs. Bobcats are found in all of the contiguous US states ranging from Quebec to central Mexico, and they seem to thrive in all types of habitats.

Because coyotes and bobcats are generalist species, we expect to see them in most habitats in southwest Wisconsin. However, that does not mean that they don’t have preferences. By examining coyote and bobcat movements, through the use of GPS tracking collars, we can see what type of habitat they are most likely to use and, by extension, what type of habitat where a deer is most likely to encounter one of these species.

Similarly, because coyotes and bobcats are generalist species, we expect that they will eat a variety of prey, including deer. We do not expect to see these species sticking to only small mammals and we do not expect to see that they are only eating deer. By examining the movement of these carnivores while monitoring the movement and mortality of collared deer, we can better understand how often these carnivores eat deer and under what circumstances predation by these species occurs. By examining deer, CWD, habitat, and carnivores, we can better understand this complex ecosystem. 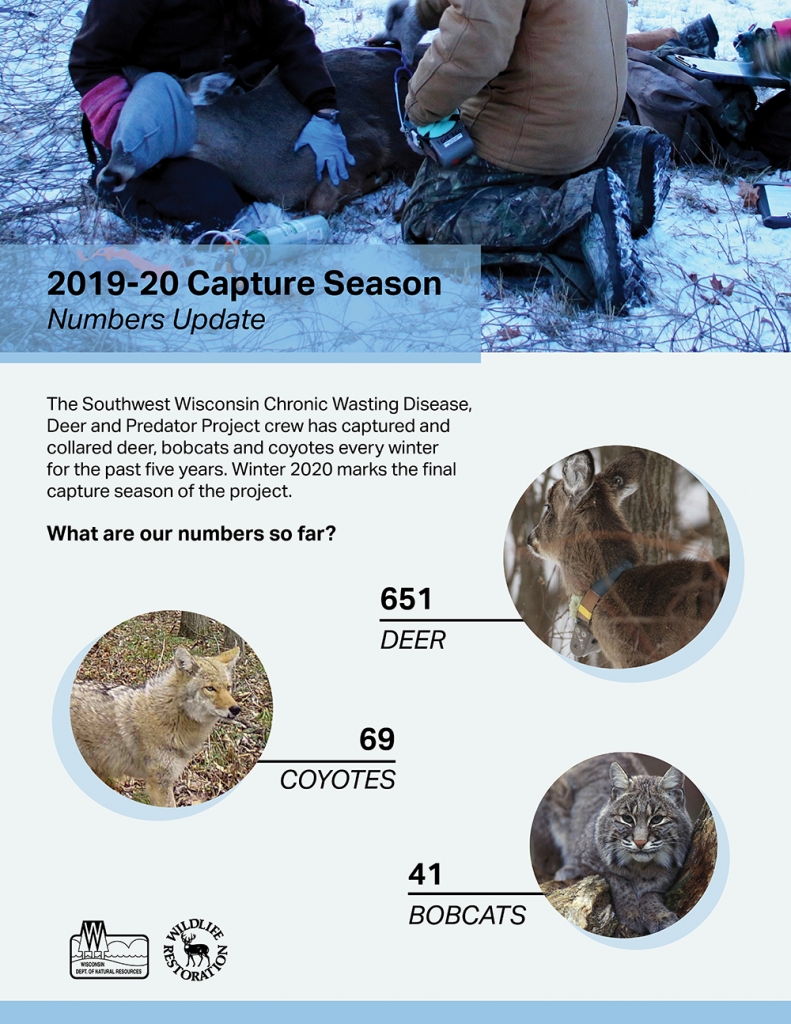 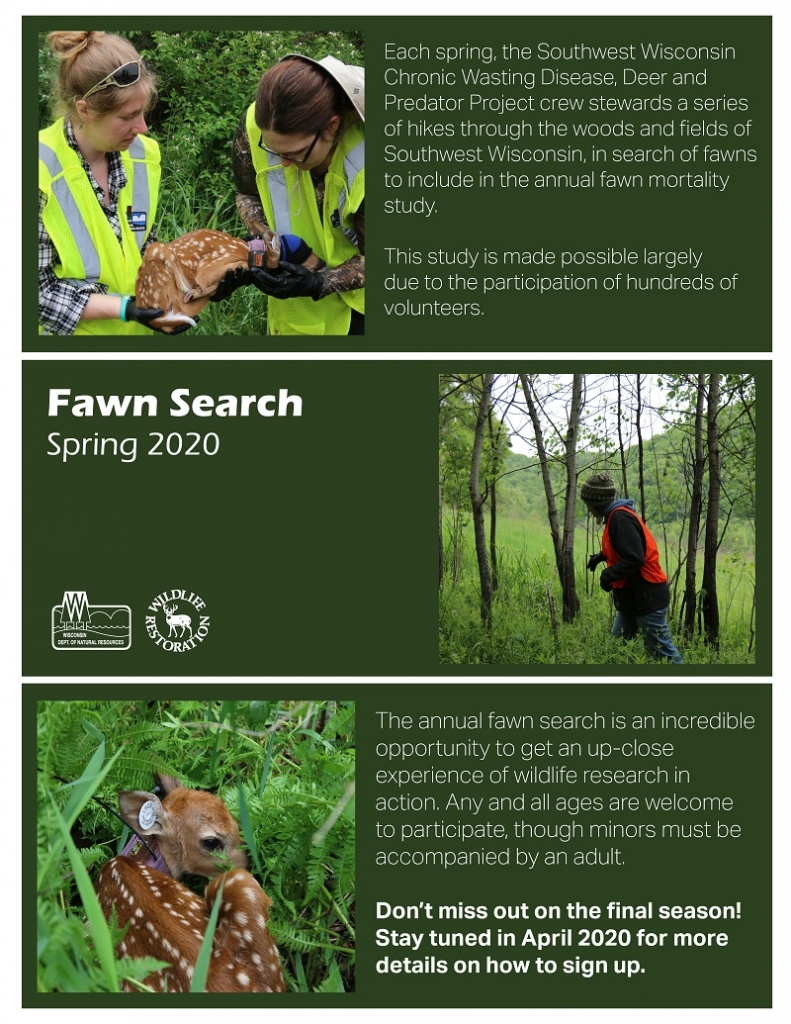