The stretch of the river bordering Wisconsin is part of the Upper Mississippi River. It is a special place, with its sweeping vistas of bluffs, bottomland forests, open water, wetlands and islands.

From the headwaters at Lake Itasca, the Upper Mississippi River extends downstream to the mouth of the Ohio River at Cairo, Illinois. It borders five states and includes more than 1,250 miles of river, but it is only a small portion of the entire Mississippi River basin.

Mississippi is an Ojibwa (Chippewa) Indian word meaning great river or gathering of waters, an appropriate name because the river basin, or watershed, extends from the Allegheny Mountains in the eastern United States to the Rocky Mountains. It is the world's third-largest drainage basin, with 250 tributaries and branches. The river basin drains 41% of the country's water from all or part of the 31 states.

In addition, the Mississippi is the third-longest river in the world, flowing 2,340 (3,770 km) miles from its source in Lake Itasca in northwestern Minnesota to the Gulf of Mexico. It takes three months for a drop of water to make this journey.

Lake Itasca, the source of the Mississippi, is a small glacial lake, approximately 1.8 square miles (4.7 km) in area. The channel of the Mississippi as it emerges from the lake was actually moved in the 1930s by the Civilian Conservation Corps, as part of a project to create a more pleasant experience for visitors. The project included the draining of the surrounding swamp, the digging of a new channel and the installation of man-made rock rapids.

The headwater stretch of the Mississippi River meanders 400 miles through bogs, lakes and forests as it winds its way through northern Minnesota until it joins the larger Minnesota River at St. Anthony Falls in St. Paul. At this point, it becomes part of the Upper Mississippi River System, a dynamic, large floodplain river ecosystem. 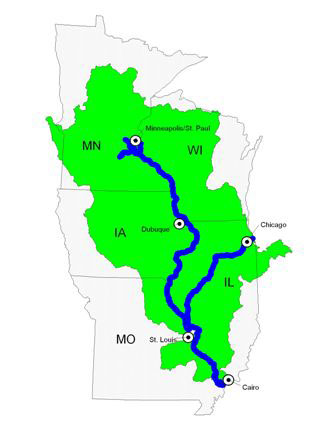 The Upper Mississippi River system is defined as the natural floodplain between the head of navigation at Minneapolis, Minnesota and the confluence with the Ohio River at Cairo, Illinois. This nationally significant commercial navigation system includes 1,200 miles of the Upper Mississippi and Illinois Rivers and the navigable portions of the Minnesota, St. Croix, Black and Kaskaskia rivers. It is a river that has been modified for navigation for over 150 years.

Before river modifications began, the Upper Mississippi River was a mosaic of braided channels and sandbars, making navigation in larger boats difficult. Water levels were also unpredictable and the river was as vulnerable to drought as it was to floods. Sometimes it was possible to wade or drive wagons across the river.

The transformation of the river into a reliable navigation highway began in earnest in 1866 with the 4-foot navigation channel project which authorized dredging, snagging, clearing overhanging trees and removing sunken vessels. However, steamboats and other riverboats needed more than four feet of water to maneuver so a 4½- foot channel project was authorized in 1878, followed by a 6-foot project in 1907. By the turn of the century, the free-flowing river had been changed into a channelized version though the use of wing dams and closing dams.

By 1930, the U.S. Army Corps of Engineers (USACE) had built more than 1,000 wing dams in the 140-mile stretch between the Twin Cities and La Crosse and had closed many of the upper river's side channels. As a result, the rivers wide shallows, braided channels and sandbars were eliminated.

These channel improvement projects culminated in the building of locks and dams in the 1930s to maintain a 9-foot deep channel. The navigation dams created a stairway of reservoirs or navigation pools from Minneapolis, Minnesota to St. Louis, Missouri. Currently, this system includes 29 locks and dams on the Mississippi River and eight on the Illinois River. Ten locks and dams are located along the western boundary of Wisconsin between Prescott, Wisconsin and Dubuque, Iowa.

This important transportation artery still serves as a primary link between the rich farmland of the midwest and the markets for corn, soybeans and wheat throughout the world.

The natural resources of the Upper Mississippi River system are equally important to the nation. In 1986, Congress officially recognized the Upper Mississippi River system as a nationally significant ecosystem as well as a nationally significant commercial navigation system. The river provides critical habitat for fish and wildlife in addition to meeting the needs of people for drinking water, recreation and aesthetic enjoyment and renewal.

Fast facts on the natural resources of the Upper Mississippi River

Years of human alterations and abuse have taken a toll even though the Upper Mississippi River is still regarded as an ecological treasure. Many of the changes were a result of channelizing the river and building the locks and dams which converted a free-flowing meandering river into a series of slack-water navigation pools. But there have been other changes as well including:

Management of the Upper Mississippi River

Management of the river today is dependent on partnerships, cooperation and coordination between federal, state and county governments because the Upper Mississippi River System is an enormous and complex natural resource that borders five states. Not only do the U.S. Army Corps of Engineers and the U.S. Fish and Wildlife Service have active roles in the management of the river but the adjoining states of Iowa, Illinois, Minnesota, Wisconsin and Missouri own wildlife management units, parks and forests within the floodplain.

States have also retained management rights and responsibilities for different interests. For example, in Wisconsin, the Department of Natural Resources has the responsibility of protecting the navigable water rights of the citizens of the state, the right of access for fish related conservation work and the custody and protection of the fishery in the river.

Many of the counties, towns and other municipalities have property within the floodplain as well. All of these entities have different roles and sometimes divergent interests in river management.

Nonprofit organizations such as The Nature Conservancy and Audubon have also targeted efforts for conservation and restoration action toward the Upper Mississippi River basin.

Although balancing the needs and demands of navigation, agriculture, recreation, industry and wildlife is not easy there are organizations and programs that help to facilitate the management of the river such as: