Click on the tabs below for short descriptions of metallic mineral deposits in Wisconsin that are currently being explored for mining or were the sites of recently closed mines.

In addition to the deposits described in the tabs below, you can read information about the closed Flambeau Mine and its reclamation. 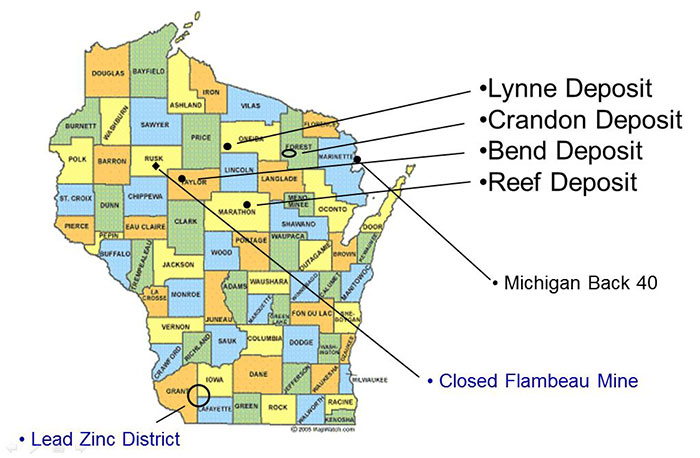 The Bend Copper-Gold Deposit is located approximately 19 miles north-northwest of the city of Medford in Taylor County, within the Chequamegon National Forest. The deposit was originally discovered in 1986 and drilled in the early 1990s by the Jump River Joint Venture. The deposit is mostly copper-bearing sulfides with significant gold and minor amounts of silver in two overlapping zones, totaling an estimated 4.23 million tons of ore.

A Notice of Intent for exploration drilling was received on September 23, 2022 from Green Light Wisconsin. The six planned drilling sites are located on parcels with a private mineral estate owned by Soo Line Railroad Company who is managing on behalf of Canadian Pacific Railway and a surface estate owned by the U.S. Forest Service. Exploration drilling will include up to 9 boreholes totaling a maximum of 7,200 linear feet of borehole including rock core samples to be completed during the winter to minimize impact.

Green Light Wisconsin also submitted a Plan of Operation to the U.S. Forest Service in June 2022.

Exxon discovered the Crandon deposit, located on private property approximately five miles south of the city of Crandon, in 1976. Companies made two unsuccessful attempts at permitting, first in the 1980s and later between 1994 and 2003. The Chippewa and Potawatomi tribes purchased the site in 2003. There is no current mining activity.

The ore deposit is 4,900 feet long, 2,200 feet deep and 100 feet wide. It has an estimated 55 million tons of ore containing zinc, copper, lead, gold and silver. Had the deposit been mined, it would have been an underground mine with approximately 550 acres of surface processing and disposal areas.

The Lynne deposit was discovered in 1990 by Noranda Exploration and is located on forestry land owned by Oneida County within the town of Lynne. It is primarily a zinc sulfide ore with significant lead and silver and minor amounts of gold and copper. The deposit is estimated to be approximately 5.6 million tons recoverable by open pit mining. Mining companies are considering further exploration and are working with Oneida County's forestry department and the county's mining impact committee to obtain exploration and development leases.

The Reef Deposit is a potential high-grade gold deposit located in the town of Easton in Marathon County. The occurrence of gold has been known in this area for many years. The current deposit was drilled and described by Noranda Exploration in the 1970s and 1980s. The deposit was estimated to contain up to 454,000 tons of high-grade gold reserves in scattered, shallow weathered sulfides and quartz breccias.

A Notice of Intent for exploration drilling from Green Light Wisconsin was received on October 7, 2022. Nine drilling areas were proposed across 3 private parcels. Exploration drilling will include up to 9 boreholes up to 650 feet deep. Six of the 9 sites will also contain a grid of up to fifteen rotosonic drill holes each bored to a depth of approximately 50-feet. The exploration drilling is planned to be conducted in 2 concurrent phases and completed under frozen conditions during the winter of 2022/2023.

The Back Forty is a zinc and gold deposit located in Menominee County in the south-central part of Michigan’s Upper Peninsula. The deposit is approximately 21 miles north of Menominee, Michigan, and Marinette, Wisconsin, and is located adjacent to the Menominee River, which is a shared resource water between Michigan and Wisconsin. Due to the proximity of the site to the Wisconsin border and the Menominee River, the Wisconsin Department of Natural Resources has been following the project and has coordinated with the State of Michigan's Department of Environment, Great Lakes, and Energy (EGLE) from the initial scoping of the project, through to the present day.

The Back Forty site boundary is wholly contained within Michigan's jurisdiction therefore the State of Michigan has sole permitting and oversight authority for the proposed mine. The original air and mining permits were issued to Aquila Resources (Aquila) by the EGLE in December 2016. In April 2017, the State of Michigan issued an NPDES wastewater permit for the proposed Back Forty Mine discharge for a maximum term of five years. The NPDES permit authorized a discharge of treated wastewater to the Menominee River, an interstate water that borders the western part of Michigan’s Upper Peninsula and the northeast region of Wisconsin. As part of the permit reissuance process, Michigan consulted with Wisconsin DNR. WDNR reviewed the permit to ensure Wisconsin water standards would be met and provided a response that the proposed discharge would meet Wisconsin water quality standards.

Specific questions or concerns regarding the proposed Back Forty Mine should be directed by email to Melanie Humphrey, EGLE, or phone: 906-250-7564.

The original mine permit documents and amendment are available at EGLE Mining.

The proposed mine location and NPDES Permit can be viewed at MiWaters - Water Resources Information and Forms search "Back Forty".

The Shoepke site was previously explored in the late 1970's by Noranda, Inc and is located in the town of Shoepke in southeast Oneida County. Badger Minerals, LLC (a subsidiary of Can-American Minerals, Inc of Thunder Bay, Ontario, Canada) has planned exploration activities for February and March, 2020 to evaluate the mineral potential of the area and was issued a metallic mineral exploration license on February 11, 2020. The three planned drilling sites are located on private parcels owned by Badger Minerals and Heartwood Forestland Group. Exploration drilling will include up to 10 bore holes totaling a maximum of 4,000 linear feet of borehole including rock core samples.